Until the day dawn and the shadows flee away

This grave was the first I researched, having spent some time rediscovering it under thick vegetation. It is still very difficult to keep tidy, wedged as it is between the old mortuary, now used for storage, and the boundary hedge. Refuse and dead vegetation collect in this corner. A cross which once topped off the plinth has fallen and smashed, as have others in the churchyard, which suffered from air raids in both world wars.

Why the grave is squeezed into this unsuitable space is a mystery. The most likely answer is that it was the only place left. Commander Mansell died in 1923, and occupies one of the last new graves to be dug. Most of the burials after this date were in existing graves.

What I discovered about Arthur Barrett Mansell and his wife Mary led me to carry on the research into all the marked burials in St Leonard’s churchyard.  He had an interesting life, but, as he and Mary had no children, it is unlikely that his biographical details will ever be researched or recorded elsewhere.

Arthur Barrett Mansell was born on 12 September 1843 in Hammersmith, and baptised at St Paul’s Church there on 22 September. He was the third child and second son of William Mansell, a Lieutenant in the Royal Navy, and his wife Susannah Maria nee Surman. Arthur joined the Royal Navy himself at 14, and saw service in Fiji, the Solomon Islands and Australia. From 1873-1875, he was engaged in anti-slavery and anti-skull hunting work, for which he was awarded the Royal Humane Society medal in 1880.

The year before, on 19 June 1879 he was married to Mary Amelia Watts by his brother, a priest, in Hythe. Mary had been born in Hythe 1847, the fourth and youngest daughter of James Watts and his wife Charlotte. James Watts was a corn and seed merchant, a JP and alderman, and Mayor of Hythe several times and the family was very influential in the town for a number of years.

Arthur and Mary moved to Swanage where, while remaining on the Navy’s active list, Arthur joined HM Coastguard. He retired in 1888 and he and Mary moved back to her home town of Hythe. They lived at ‘Fairlyte’ in North Road, and Arthur  became a JP and sat at Kent Assizes. He was also a supporter of the Life Boat Society, and Churchwarden at St Leonard’s Church where his name is inscribed on one of the bells. In his will he left a large sum to the Royal Victoria Hospital in Folkestone. Mary worked tirelessly to raise money for the Hythe Nursing Fund. Mary’s parents and sister Ellen, who died tragically, are also buried in the churchyard.

St Leonard’s is a beautiful church in a beautiful place, standing high above the Cinque Port of Hythe. Built in the thirteenth century when the town was home to prosperous merchants and seamen, it still receives thousands of visitors a year, many coming to visit its extraordinary ossuary, one of only two in England.

For over nine hundred years it has been a place of pilgrimage and worship, and its graveyard has been in use for all that time, although it was closed for burials during the 1950 after being extended several times. While helping out in a small way with some tidying and clearing at the churchyard, I became interested in the gravestones: who were the people who rested here? Sadly, some gravestone inscriptions are already illegible and others showed wear and tear. 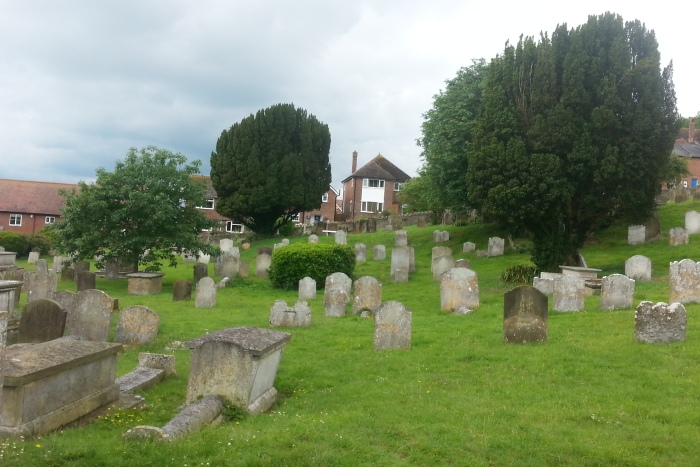 I decided to record all the inscriptions which were still legible, and, while I was at it, to research each of the names.  Later in the project I was joined by Kathryne and Christopher. There are 750 stones in total. What will follow are the stories of some of the people buried in this peaceful place.