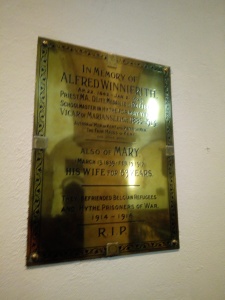 Alfred Winnifrith came from a modest background. He was born in Penshurst, Kent on 22 April 1842, the son of a blacksmith, Thomas Winnifrith and his wife Lucy, nee Langridge and had two younger sisters. After leaving school, he worked as a pupil teacher and then gained admission to Culham College, Oxford (then the Oxford Diocesan Training College),  where Anglican teachers were trained. Afterwards he took up a post at the National School in  Coven, Staffordshire, along with a sister, who taught needlework. Here he was pid forty pounds a year and recived about twenty-five pounds in parental contributions, plus a furnished house with a garden.

Alfred was now in a position to marry and n 22 December 1863 he wed Mary Anne Baker, only daughter of Thomas Baker of Hythe at St Leonard’s Church. They had met at a magic lantern show when Mary Anne was visiting Penshurst.  and they returned to Coven where their first son, Alfred Baker Winnifrith was born the following year. The year after that, they returned to Hythe, where Alfred took over Prospect House School, and another son, Bertram, was born there. A third son died as an infant.

An early advertisement for Prospect House School. The house still stands in Hythe.

The school flourished, but Alfred had other plans. In spring 1874, he and the family moved to Oxford, where he studied for the priesthood and in 1876 he was ordained Deacon and became assistant curate at St John’s church in Cleckheaton, Yorkshire. He kept the school going, however, and appointed a headmaster in his place. The income must have meant that he could support his family on a tiny stipend. It was not normally expected that curates would be married men with children, and Alfred and Mary now had another son, Douglas, born in 1876. 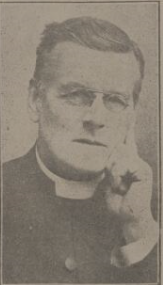 Alfred found time to continue his studies. He was awarded an MA in 1878 and soon afterwards became the first Incumbent of the newly-formed Parish of St Luke’s, Cleckheaton. He still needed to supplement his income, and took some private pupils for tuition. 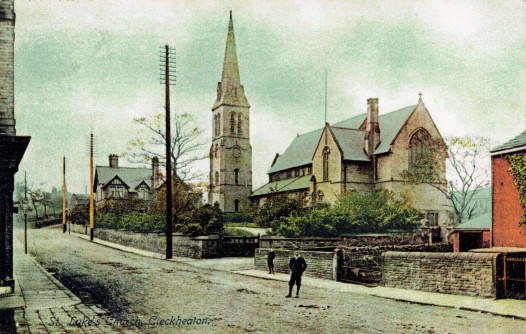 They stayed in Cleckheaton for another seven years, until in 1885, Alfred became Rector of Mariansleigh in Devon.

Their sons were becoming adults. Alfred junior became a priest like his father and took a curacy in another Devon parish, Dalwood. Bertram, after working as Assistant Master at St John’s Royal Latin School in Buckingham, took over the school in Hythe. He was by then married to Emily, a Plymouth woman, and they had a daughter, Ethel. Emily died, aged only twenty-eight, in 1894, and Bertram’s parents brought the little girl up.

Alfred remained single, but he had a secret. In 1896, Henry Hern, a Devon miller, sued his wife Rosa for divorce, citing as co-respondent Alfred Baker Winnifrith, curate of Dalwood. The affair had been common knowledge – on one occasion at a School Board meeting, all the members left the room in disgust when Alfred put in an appearance. He was seen using the back stairs at the Herns’ home and Rosa visited his lodgings. The couple were seen kissing. Henry Hern wrote to Alfred’s mother complaining about his behaviour. Rosa, confronted by her husband, took her six-year-old son and, apparently, vanished.

Alfred denied it all and got his brothers and parents to give evidence to the court in his favour. He said he had no idea where Rosa had gone, but produced a letter from her which confirmed that theirs’ was a platonic friendship and that he had tried to reconcile husband and wife.  The jury did not believe him and granted Henry Hern a decree nisi and gave him custody of his son.

Alfred did not give up trying to prove his innocence. His counsel advertised widely for Rosa and she was eventually found in Yorkshire where she was working as a ‘pianiste’ in a public house. She said she had no idea about the divorce proceedings, despite the fact that the case made the national news for several days in a row and she emphatically denied adultery. Alfred now took the case to the Court of Appeal. His application for a new hearing was refused and the judge remarked that ‘he had much to learn before he became fitted for the cure of souls.’ He also awarded costs against Alfred.

Rosa went back to Yorkshire, where she worked as a barmaid at a hotel in Leeds. Alfred went to Hythe, to work in the school in Prospect House. It seemed to be over, but on 4 December 1896, Inspector Conquest of Scotland Yard arrived at the Hythe school and arrested Alfred. The next day he  travelled to Leeds and arrested Rosa. They were both taken to Bow Street Police Station and charged with perjury and conspiracy. Bail was refused and they were remanded in custody.

It was alleged that when she left Henry Hern, Rosa and her little boy went to Ashford, not far from Hythe, where she took lodgings. There, Alfred visited her regularly, taking a bedroom which connected with hers. His frequent absences from his parish were noted. Rosa then moved to Barnsley, leaving the child in the care of an Ashford woman, whom she paid with money given to her by Alfred. In Barnsley she worked as a barmaid, under an assumed name, and Alfred wrote at least twice a week. She kept his photograph in her room. 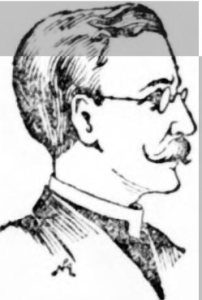 The evidence that they had lied to the divorce court was clear, and on 12 January 1897, they pleaded guilty to all charges. Three days later, they were sentenced – Alfred to eighteen months hard labour and Rosa to six. Bertram got up a petition asking for mitigation of Alfred’s sentence, which he circulated widely, but to no avail. They were both held in Wormwood Scrubs: Rosa learnt macramé and how to make bead curtains; Alfred sewed mail bags. Once released, they married in 1899, and together ran a school in Clapham and had a daughter, Alfreda. Alfred had, of course, been defrocked.

The widowed Bertram, meanwhile, got on with running the Hythe school, and married again, to Edith Maude Blaker in 1897. They had five children together and Edith ran a girls’ school alongside the boys’ institution at Prospect House.

A 1902 advertisement for the school.

Bertram was awarded an MA from Oriel College, Oxford in 1901, was ordained in 1904 and ‘priested’ in Canterbury Cathedral in 1905. He combined duties as a curate in Cheriton and later Saltwood with school teaching until he was appointed as Rector of Ightham in 1907. Even there he continued to run a small school.

The youngest son of Alfred and Mary, Douglas, also got an MA from Oxford and was ordained in 1900. He chose to become a Chaplain to the Armed Services serving in Malta from 1908 to 1912 and then in Dublin. He had married Margaret McCartney in Liverpool in 1907. At the outbreak of the Great War he was sent to France, was mentioned in despatches and wrote movingly of his experiences during the Retreat from Mons in The Church in the Fighting Line:

Through the wet cornfields I rode, accompanied by three or four men of the Royal Army Medial Corps, and whenever we found a fallen comrade we bore his body to a corner of the field, to secure as far as possible its never being disturbed, and there we dug a shallow grave. Often, of course, more than one, sometimes three or four, and in one case eighteen men did I bury in one grave. 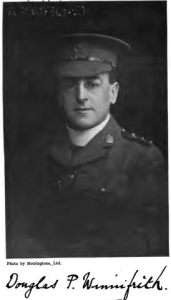 Meanwhile, Alfred senior’s wife Mary was spending less and less time in Mariansleigh as the winters were too severe for her. Alfred resigned the living in 1913, citing her “delicate state of health’ and returned to Hythe, where they lived at Prospect Lodge and where, in December that year, they and their sons and grandchildren celebrated their Golden Wedding.

Belgian refugees were beginning to stream into the country, and Alfred co-ordinated Hythe’s efforts to accommodate some of them and provide food, clothing and schooling for the children. He also took a particular interest in local men taken prisoner of war, visiting their families and arranging to have parcels of food, underwear and tobacco sent out to them. Mary assisted him in these endeavours, packing the parcels herself. Their house became a rendezvous for troops stationed in the town, whether Territorials or Canadians, they were always made welcome at the gatherings held there.

There was sorrow, too.  Alfred and Mary’s granddaughter Alfreda died in 1914, and Mary herself in February 1917.  She was buried in St Leonard’s churchyard in the same grave as Bertram’s first wife, Emily.  Douglas, with the forces in France, missed her funeral.

When peace came, Alfred’s work was recognised. In 1919, for his literary work he was awarded the degree of Doctor of Literature by the Central University of America. In 1920 he was awarded the Medaille du Roi Albert avec Rayure at an investiture held at Folkestone Town Hall by the Belgian Consul in recognition of his work with Belgian refugees.  The former Hythe prisoners of war gave him a silver inkstand.

But he kept busy. For three years after the war ended he entertained some 30 Hythe men returned from prisoner of war camps to ‘a substantial meat tea’ at Mrs Gravenor’s tea rooms. He arranged for a tablet to the memory of Thomas Quested Finnis, one time mayor of Hythe and Lt Col John Finnis his brother, both men of Hythe, to be installed in the gardens of Prospect Lodge and for another to be erected in the High Street to the memory of the inventor of the steam screw propeller, Sir Francis Petit Smith who was born at 31 High Street. He also presented a bell for use at St Michael’s church, the ‘tin tabernacle’.

He died on 2nd January 1923 at Prospect Lodge and was buried with Mary. It was said in his obituary that ‘no man loved Hythe better’.

Bertram followed him to the grave the next year. In his will he left £7267. This was divided equally among his wife and his children by Edith, but Ethel, the daughter of his first marriage, received only £500. She had emigrated to Canada alone three years earlier to work as a lady’s companion.

The surviving brothers erected the brass plaque to their father in St Leonard’s church, at a spot directly above the pew they had occupied as a young family, sixty years before. 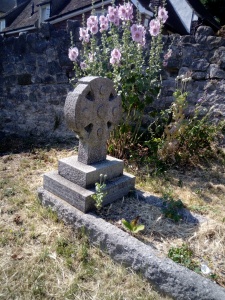 The grave of Alfred, Mary and Emily Winnifrith in St Leonard’s churchyard

Alfred died in Clapham in 1950 and Douglas in 1955 in Tunbridge Wells.

I am grateful to Kathryne Maher and Christopher McGonigal for their original research into the Winnifrith family.