Margaret Cobay, the eldest child and only surviving daughter of George and Hannah Cobay, married Charles Donatus Bailey on 15 November 1871 in Hythe.  He described himself on the marriage certificate as a gentleman, though he had told the census enumerator a few months earlier that he was an innkeeper, and, in fact, he was landlord of the White Hart in Hythe High Street. He was the son of a plumber and had been born in Hythe. The couple had three children in the next five years, although two died as infants and then Charles died, aged only thirty-eight, in 1876. Early the following year, Margaret gave birth to their fourth child, a daughter. She moved back to live with her father at 40 (now 86) High Street, Hythe with her two daughters and lived there for the rest of her life. Her daughters, Frances and Ellen, both married and her brother Henry moved in after her father’s death. She died aged seventy-seven on 6 August 1916. 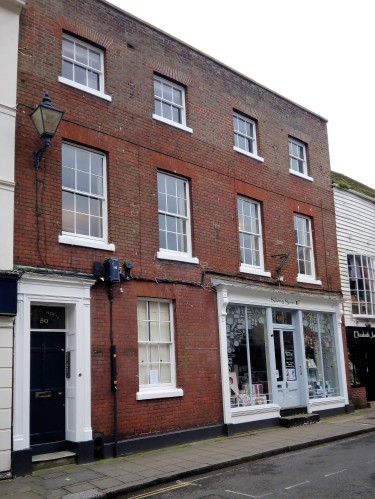 George, the firstborn son of George and Hannah Cobay, was born in Cephalonia on 4 July 1843. In 1865, he applied to join the Inland Revenue, but needed to prove evidence that he was in good heath. A Hythe physician, Charles Fagge, wrote to the Revenue to say that he had examined George and that he was free from any defects or diseases. 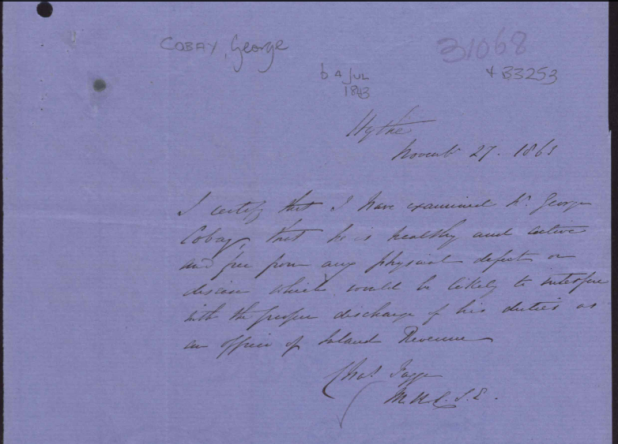 He was duly appointed as an excise officer, and worked in Maidstone. However, he had perhaps inherited his father’s wanderlust, as he is next heard of in Ontario, Canada, where, on his thirtieth birthday, he got married. He took a couple of years off his age, perhaps to disguise the discrepancy between his age and that of his bride. Esther Geraldine Hoyt was only seventeen when they married on 4 July 1873.  She was the daughter of Samuel and Emmeline Hoyt. George said he was a ‘baggage master’.  The couple married in Brantford, a tiny settlement with a population in 1869 of  700. It did, however, have a railway station, which is perhaps where George worked.

They had two children, Mildred Edina Margaret in 1875 and George Robert in 1877, but sometime in the next three years George died.  By 1880 Esther has moved back into her father’s home, a widow. Only little George Robert is with her, so probably her daughter also had died.  She married again in 1882 and had other children.

George Robert grew up and married, moved to Toronto and had children of his own.

John Cobay, the fourth child of George and Hannah, first tried his hand at farming, at Palm Tree Farm, Lyminge, a village not far from Hythe. He was there when he married Julia Burch, a miller’s daughter, at Newington parish church on 27 November 1872, and his daughter Louisa Julia was born there in 1873. Another daughter, Lizzie Ethel was born the following year. By 1881, however, John had taken on the licence of the White Hart inn, vacated when his brother-in-law Charles Bailey died. Here he remained until his death.

A frequent customer was the author Joseph Conrad, who lived at nearby Postling in the early years of the twentieth century. He was sometimes visited there by Ford Madox Ford who accompanied him on his weekly trips into Hythe in a pony and trap. Ford in his memoir describes how at the White Hart

…the benign, dark, statuesque and really beautiful Miss Cobay presided in the dimmer recess of that very old tavern.

He says that Louisa was

…invariably silent. The writer at least never heard her utter one word, except that, years after, motoring through that ancient Cinque Port, the writer, for old time’s sake, took a drink at the bar of the White Hart, and Miss Cobay with her enigmatic gaze asked after Mr. Conrad. 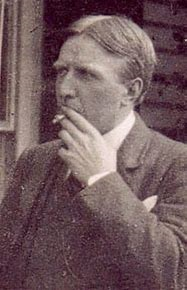 After refreshments, the pair would often continue to Sandgate, to visit their friend H G Wells who had a house there.

John died in 1907, of influenza. Julia, with Louisa’s help, continued to run the White Hart after his death for at least four years. Her brothers regularly held their auctions there and it was acknowledged that most f the Town Council’s real business was conducted in the parlour rather than the council chamber. Louisa – or Lou as she was known-  had, by this time, apparently become quite eccentric.  A large woman, she dressed to impress and it was rumoured that if the councillors could not decide how to act in a given situation, she would make the decision for them. She kept a large and very vociferous parrot.

Lizzie had married, in 1894, Stephen Katinakis at St Leonard’s church in Hythe and moved to Devon. By 1939, she was widowed and she and Louisa, who never married, lived together with Ethel’s only daughter, Betty, in Wiltie Gardens, Folkestone. 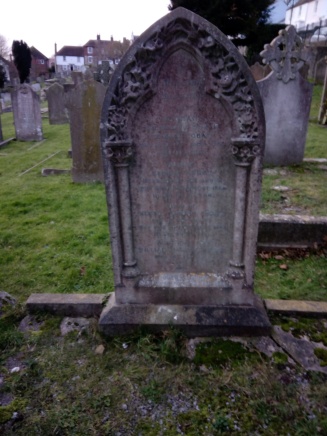 The ornate but now nearly illegible grave of Charles Donatus Bailey & his family. The inscription reads: 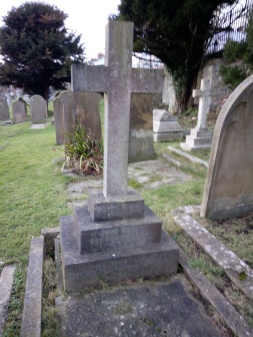 And next to it the grave of John and Julia Cobay. Their inscrptions says:

As the seventeen-year-old George Cobay left his Lincolnshire village on a cold February day in 1833, could he, an illiterate labourer, have imagined that he would live into the next century, that he would become Speaker of the Cinque Ports, that three of his sons would be mayors of Hythe, that two of them would have businesses in London’s exclusive Bond Street or that he himself would die full of honours and that a Baronet would send a wreath to his funeral? Probably not. What he clearly had though was a desire to see more of the world than Claypole (population 593) could offer.

George was born on 3 October 1815 in Claypole. He started his working life as a labourer, but when he was seventeen he joined the army, making his mark on his attestation papers – he could not write. He served in the 19th Regiment of Foot, where he rose in 1843 to the rank of Sergeant and his character and conduct were judged to be excellent. Judging by his later career, he must also have learned to write. He spent over ten years abroad, in the Mediterranean, the West Indies and North America before being discharged as unfit after twenty-one years in 1854. He was then thirty-nine and was diagnosed as having ‘chronic rheumatism originating and caused by length of service and constitutional infirmity’. George was five feet six inches tall, with hazel eyes and a sallow complexion.

Presumably some of his service in the United Kingdom was in Ireland, because by the time he was twenty-four he was married to Hannah, a Co. Cork woman. She travelled with him on his postings. Her eight children were born in Dublin, Malta, Canada, Cephalonia, at sea in the Mediterranean, Winchester and the last in Hythe, where the family settled immediately George left the army.

Why Hythe? The link is the new School of Musketry in the town. Colonel Hay, the first Commanding Officer, who arrived in the town in June 1853, was himself from the 19th Regiment. He had already appointed that August the first instructor, Sergeant MacKay of the 19th Foot and it looks as George had come to his notice, too, as a man of intelligence and initiative. At any rate, George took the civilian post of mess master at the School. 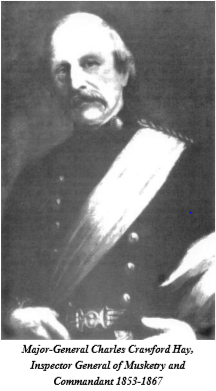 By 1861 he had acquired the licence of the Swan Hotel in the High Street. It was a large coaching inn and likely to profit from the large numbers of officers and NCOs visiting the town. It was also conveniently situated near the Town Hall and could provide dinners and banquets for civic functions. 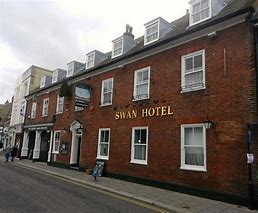 He prospered, becoming as well as a landlord,  a landowner. He acquired a parcel of land off Donkey Street on the Romney Marsh and started to call himself a grazier rather than an innkeeper. In 1877 he was able to lease to Hythe Cricket Club his land next to Ladies Walk in the town. That was the year that Hannah died, aged only fifty-six.

Six of her eight children had survived to adulthood, though two infant daughters, Mary, born in Malta and Maria, born in Quebec, did not. She had seen the eldest three, Margaret, George and John married. The three younger sons, Henry, William and Robert, were well on the way to becoming successful business men, and she had become a grandmother.

George had also become a Town Councillor  in the 1860s, retiring in 1898, and a JP – he was still on the bench only four months before his death.  He was mayor of Hythe in 1881 and 1882 and Speaker of the Cinque Ports in 1882. He was, according to the local newspaper, greatly respected in these roles as well as in private life. His illness was reported in the papers in early August 1900. Until then, he had been in robust good health and enjoyed taking long walks. The chronic rheumatism of his army days seems to have been cured by Hythe’s sea air. His funeral was a grand affair at St Leonard’s church, attended by the great and good of Hythe, and graced by a wreath from the town’s MP, Edward Sassoon, Bart. 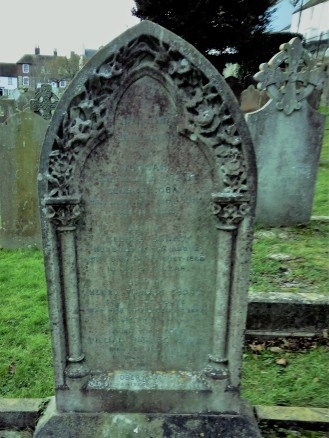 The grave of Robert and Hannah Cobay and of their three unmarried sons, Henry, William and Robert. The inscription reads: