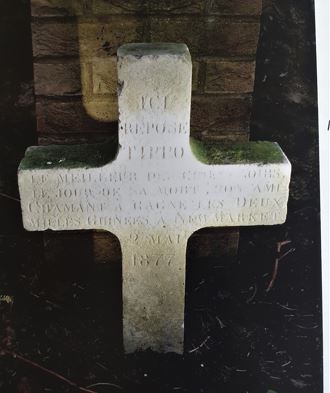 In the garden of Eastbridge Court in Hythe is a small stone cross.  It bears the inscription:

Here lies Tippo, the best of black dogs; on the day of his death his friend Chamant won the Two Thousand Guineas at Newmarket, 12 May 1877

Originally located under the shade of a mulberry tree in the grounds of what was then Eastbridge House, it was moved, perhaps when the tree was cut down.

The clue to Tippo’s origins lies in the mention of ‘his friend Chamant’ who won the 2000 Guineas. Chamant was a French-bred racehorse, jointly owned by Charles-Joachim Lefèvre and Count Frederick la Grange. The horse had been brought to Newmarket the previous year to be trained by Tom Jennings and his first year of racing made him the third most successful horse of 1876 in Britain. As a three-year-old in 1877 he won the 2000 Guineas ‘with consummate ease’ but sustained an injury which ultimately ended his racing career. He spent the rest of his life at the German Imperial Stud, siring many more winners and dying in 1898.

His owner, Lefèvre, was a very wealthy, flamboyant character and significantly successful in the horse-racing world, winning no fewer than seven English classics.  His portrait was painted in London by a French artist, Jean-Leon Gerôme, who had fled the Franco-Prussian war.

Lefèvre was married to Marie-Anne D’Escoubleau de Sordis, considered a beauty. She, too, was painted by Gerôme at about the time of her marriage. Her husband’s portrait can be seen reflected in the mirror behind her. 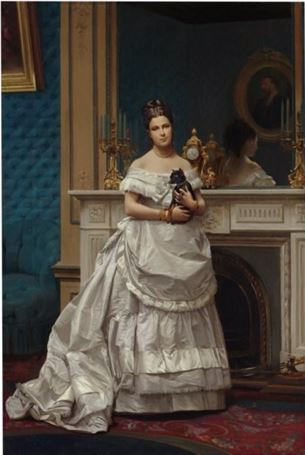 More importantly for our purposes, she is holding a small black dog. It has been identified as a Griffon Bruxellois and surely, this must be Tippo.

Unfortunately, there is no record of either M. or Mme, Lefevre staying in Hythe.  They did, however, have a daughter, Marie-Jeanne, baptised in London in 1872., The gravestone for Tippo and its language seem just the sort of thing which might be made to comfort a little girl grieving for her pet, ‘the best of black dogs’.

As a postscript, this is not the only doggy grave marker in Hythe. This little plaque was in the wall of a garden:

The name of his bereaved owner is sadly illegible, and Fido was probably not as well-connected as Tippo, but undoubtedly as dearly loved.