The next two plots in St Leonard’s Churchyard are dedicated to four generations of the Wilks family of Hythe. 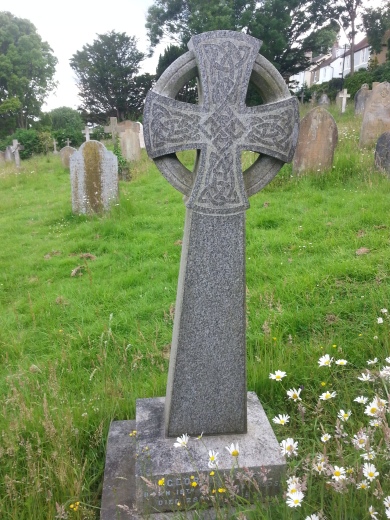 The first was George Wilks who was born in Ospringe, Kent, and baptised there on 18 January 1836. He was one of the fourteen children of Edward Frederick Wilks, a farmer, and his wife Maria. By the age of twenty-five he was a qualified solicitor and had married Fanny Stringer. She was the daughter of William Stringer, an Attorney of New Romney, and his wife Mary. After their marriage, in 1861, the couple lived in Mount Street in Hythe, later moving to a house in the High Street next to George’s office, where eleven children were born to them. George was Town Clerk for over thirty years and also Treasurer and Manager of the Hythe Church of England Girls’ School.  His other interests were wide-raging: among them, membership of the Kent Archaeological Society, secretary of the Hythe branch of the Royal National Lifeboat Institution, treasurer and manager of the National Schools and churchwarden at St Leonard’s  Church. He had been largely responsible for persuading the South Eastern Railway to bring a branch line to Hythe. At his funeral, the coffin was carried by members of the Coast Guard and the Lifeboat crew.

After his death, Fanny moved back to New Romney to live with her sister Laura, and died there 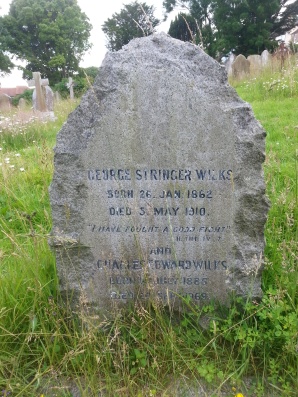 Their eldest son was George Stringer Wilks, baptised at St Leonard’s Church on 14 March 1862. By the age of nine he had been sent away to school at Rocky Hill House in Maidstone. After school, he followed in his father’s footsteps and at nineteen was an articled solicitor’s clerk.

In 1886, newly qualified as a solicitor, he married Florence Gertruda Lovegrove and took a house in Church Avenue, Hythe.  Two daughters were born: Sibyl in 1887 and Katherine in 1889 .   George practised law together with his father from their offices at 54 (now 114) High Street, Hythe, and he joined the volunteer battalion of the Buffs East Kent Regiment, something which seems to have been expected of local gentlemen. Obviously a good shot, in 1889 he was appointed an Instructor at the Hythe School of Musketry. Originally established in the mid-19th Century, the school taught skills in firearms and marksmanship to Army officers.  Always a busy man, George also served as Town Clerk, a post he had inherited from his father,  and Clerk to the Magistrates of Hythe.  In 1889 published ‘The Early History of Hythe’. In 1908 was appointed joint solicitor to the Cinque Ports Courts of Brotherhood and Guestling. His death at forty-eight was sudden: he complained of feeling unwell, was operated on for appendicitis that day, but died within thirty-six hours. 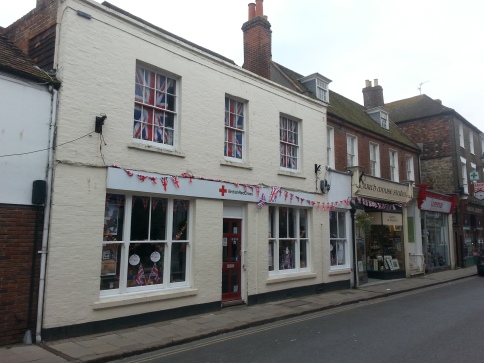 114 High Street, Hythe, where George Wilks and his son George Stringer Wilks practised law and raised their families. Now a Red Cross charity shop, it is decorated for the biennial Hythe Festival.

His sister, Mildred Stringer Wilks also rests here. She was the sixth child of George and Fanny Wilks and lived at home until her late twenties, when she took up a post as matron of a girls’ boarding school in Lancashire. She returned home later in life and died in the Folkestone area.

The first George Wilks had a much younger brother, Charles, a farmer at Chislett, who married and had a son, Charles Edward  Wilks. Charles senior died young, and his wife sold the farm, of 754 acres, and took her children to live in South Shields, where she had been born. Charles junior became a chartering clerk with a shipping broker there.  However, in 1917, he returned to Kent, and married Sibyl, the daughter of George Stringer Wilks, and his own second cousin, in Hythe.  They are buried here together.

The son of Charles Edward  and Sibyl Wilks was John Wilks, born in  London in 1918. He was a member of the Friends Ambulance Unit which, during WWII transported medical supplies into China for civilians and worked alongside the Chinese Red Cross in tending casualties. He later became a surgeon at Bolton Hospital. He married Wu Shih Tsen, ‘Doris’, who was born in China and was a fellow member of the Friends Ambulance Unit . They had two children. Both John and Doris Wilks are commemorated on this plot.

Sibyl’s sister Katherine is also named here. She married Charles F.H.Baines in Kensington in 1924.  They later lived in Fulham where Katherine worked as a beautician. Charles died in 1958, and in 1967 Katherine married the artist Mordaunt  Mauleverer  Parker who died three years later.