James Warby was born on November 15 1822 in Hythe, the son of James and Mary Warby, but died a long way away, having almost circumnavigated the globe.

His older brother William was transported to Van Diemen’s Land in 1835 and four years later, his father took the decision that the whole family would travel across the world and join him – though they ended up in New South Wales and William joined them there when he got his freedom.

On 10 March 1846 James junior married nineteen-year-old Mary Blanch, the child of free immigrants and six months later, their first child was born, the eldest of no fewer than eighteen, including two sets of twins. Sadly, several died as infants and only nine lived long enough to be married, but even that was an achievement in the circumstances in which they lived.

One night in 1852,  when walking home from work, James stopped to listen to two street-corner preachers from the Church of Jesus Christ of Latter Day Saints (Mormons).  He was impressed by what they had to say and attended a meeting, together with Mary Ann and his children, that same evening.  At further meetings they learned about the Mormon settlements in Utah and decided that there, not Australia, was where they belonged.

They were both baptised into the church, by total immersion in the Williams River, in 1853.

They left their home, and went to stay with a brother  of Mary Ann’s until they set sail from Sydney on 22 March 1854, on the ship Julia Ann together with seventy-odd other converts.  That was the last the family in Australia heard of them. It may be that James wanted to disassociate himself  from the family scandal created by his brother and sister (see Sinners and Latter Day Saints part one). They landed at San Pedro, California in June and settled at first in San Bernardino. There was a large Mormon community already there, sent down from Salt Lake City in 1851 to establish a colony on the Pacific coast, as an out-fitting post for the church, and as a Pacific port where converts might be landed. Formerly they had disembarked at New York. The overland journey to Utah could be shortened by two-thirds.

In autumn 1856 or spring 1857 James and his family made the long trip by wagon to Utah, setting up home with three other families at a place called – or named by them – Beaver (it later became famous as the birthplace of Robert Leroy Parker aka Butch Cassidy). 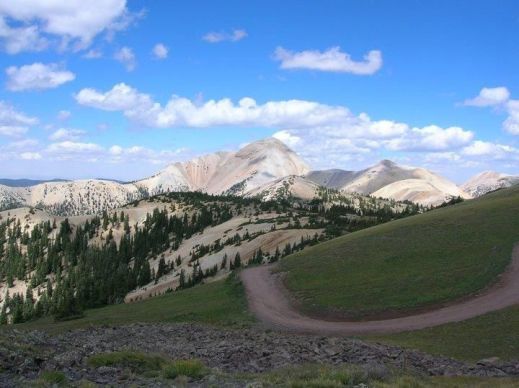 The countryside near Beaver.

The men started to clear land and  fenced in  twelve acres.  They made roads to get into the canyons where there was abundant timber to build their houses, log cabins with mud roofs and hard-packed dirt floors.

Everything had to be made from scratch – furniture, wagon wheels, scythe handles, churns,  cradles, buckets and washboards. In the early days there was no metal available, so spoons, butter paddles, bowls, and wash basins were all wooden, too. Mattresses were filled with straw. The  women carded wool, spun yarn and wove it into cloth. They cooked what they could grow or hunt. There was no organised education for the children and none of the Warby children ever attended school.

More migrants arrived and gradually life got easier. There was a proper meeting house by 1868 and in  1872 a woollen mill was built and women could now buy fabric off he bolt. James became the proprietor of a sawmill and a lime kiln.  The children grew up and married and had children of their own. Then, extraordinarily, in 1896, most of the clan, including James and Mary (now 74 and 69 respectively) took seven wagons, a hundred  head of cattle, seventy horses and two mules and travelled four hundred miles to relocate in Lucerne Valley (later renamed Manila)  and start the settlement process all over again.

James and Mary in later life

James died in 1906 and Mary in 1915. They had fifty -five grandchildren  and a hundred and sixty-eight great-grandchildren. Knowing about family was (and is) important to Mormons. They believe that the family is the basic unit of earthly and heavenly existence. Those members who have died without being baptised into the church can be baptised after death, to ensure that the family is intact in heaven. It was therefore critical to know exactly who one’s family members were. It was apparently for this reason that James told his children about the illicit union between his brother and sister, William and Celia Warby, in Australia.

The grave of James and Mary (www.findagrave.com)