I thought, having completed ‘Armenia, India &  Mesopotamia: The Finnis Grandchildren’ eighteen months ago,  that I had also completed the story of the descendants of Robert Finnis, upholsterer of Hythe, but a telephone conversation with Christopher Young proved me very wrong. Christopher is a retired judge who studied history after his retirement and developed a particular interest in Henry Finnis Blosse Lynch.

In that last post, I left Henry Blosse Lynch, Robert’s grandson, in 1856 in Paris with his wife and the comment that he died there. There was, in fact, more to come.

Henry had gone to Paris with his wife, Caroline Anne, the daughter of Robert Taylor and his wife Rosa. Their love story was unusual even scandalous, as Robert, then a nineteen-year-old British army ensign, had eloped with Rosa, the daughter of an Armenian merchant, when she was twelve.

Their children did not arrive until some years later, which gives me hope that until then the relationship was innocent. It was not, latterly however, without excitement. In 1808, when travelling with her infant son  to join her husband in Bombay (Mumbai),  Rosa’s  ship was captured by pirates and a ransom had to be paid to get her back. The adventure made her the talk of Bombay for months to come. Later, in 1829, after a trip to England, she eschewed the usual sea journey and travelled  overland from England to Baghdad where her husband (now Major Taylor) was the British resident. One of his claims to fame was that he had found near Nineveh a hexagonal clay tablet containing King Sennacherib’s account of his conquests. In the same way that the Parthenon marbles became known as ‘Elgin’s marbles’, so Sennacherib’s prism became ‘Taylor’s prism’. Rosa sold it to the British Museum in 1850 where it can still be viewed. 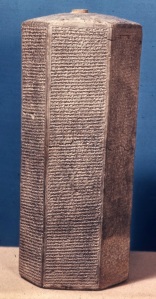 But I digress. Henry Blosse Lynch and Caroline Taylor had five children. In Paris, Henry established himself  as a well-known and popular member of the English colony. At the conclusion of the Persian war of 1856–7, he was delegated by Lord Palmerston to conduct the negotiations with the Persian plenipotentiary, which resulted in the treaty of Paris of  March 1857.  He also wrote papers for the Royal Geographic Society on the Tigris. The children grew up .

The second was Alice, born during Henry’s soldiering days in Bombay (Mumbai) in 1844.  Regarded as a great beauty, she married in 1867 Adolf Wilhelm Kessler, a banker.

Alice Blosse Lynch at about the time of her marriage

Their son Harry was born in Paris on 23 May 1868.  Two years later, the couple visited Bad Ems, a spa town on the Rhein. Also holidaying there was the Kaiser, Wilhelm I, who was smitten by Alice, introduced himself on the promenade and remained an admirer for the rest of his life. This, of course, resulted in rumours that the two were lovers and that Alice’s children were by the Kaiser, despite the fact that Harry was born well before they met. The rumours were fuelled by Wilhelm’s insistence on being godfather to Harry’s sister, Wilhelmina and by his ennoblement of Adolf, who became a count (or more correctly, Graf). Otto von Bismarck , the German Chancellor, was another admirer, enchanted, he said, by Alice’s singing. 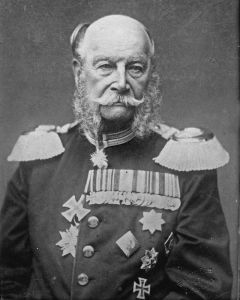 The admirers: Wilhelm I, Bismarck and Bülow,

Admiration could have its downside.  Another of Alice’s devoted followers was Bernhard von Bülow, later another German Chancellor. He made an ill-judged attempt to seduce Alice while her husband was away and was rebuffed. He took his revenge fifty years later by using his memoirs to suggest that Alice, now long dead, had been the mistress of General Georges Ernest Boulanger, soldier and nationalist politician. In fact, these rumours had been current years before, but had been successfully quashed by the family. 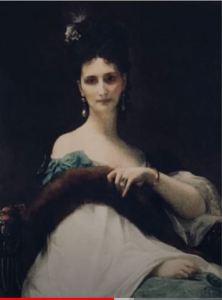 Alice in later life, rather ethereal

Alice consoled herself with amateur theatre where she performed the works of Maupassant to invited audiences and was congratulated by Ibsen himself on her performance as Nora in The Dollshouse . He especially liked  her ‘tempestuous’ dancing of the tarantella. (1)

Adolf died of throat cancer on 22 March 1895 and Alice never recovered from her loss. She developed a debilitating but undiagnosed illness and retreated from society, refusing to see old friends except occasionally in dimmed light. Winters were spent hidden in her Paris apartment, summers in a semi-derelict chateau in Normandy. Her correspondence with her beloved son Harry during her declining years was full of misery. She died on 19 September 1919. Harry was devastated.

Harry Kessler as a young man

Harry (in full, Harry Clement Ulrich Kessler) was a brilliant but complex character. Educated in France, England and Germany, he studied law and art history in Bonn and Leipzig  respectively. His biographer, Laird M. Easton, describes his contribution to the cultural and political life of Germany (and beyond) during the inter war years as aesthete, art patron, diplomat, diarist and peace campaigner.  He supported artists such as French sculptor Aristide Maillol, Belgian architect Henry van de Velde, English theatre designer Gordon Craig, and Austrian poet and playwright Hugo von Hofmannsthal;   during World War 1 he served as a soldier, propagandist, and secret agent and after it embarked on a public career as a committed internationalist and pacifist, a stance that led ultimately to his exile from Germany after Hitler’s rise to power.

Harry returned to Paris, then went on to Mallorca and finally to the southern French provinces. He died in 1937 in Lyon at a hostelry owned by his sister (now the Duchesse de Frioul) and is buried in the family plot at Père Lachaise cemetery, Paris.  He never married. His preference was for beautiful young men, notably a French cyclist called Colin. As I write this, I cannot but think how impossibly vulgar Harry would find the notion of being the subject of a blog post.

His grandmother, Rosa, meanwhile, widowed, went  first to Boulogne and then to England where she stayed with her daughter Harriet in Cleveland Square, Bayswater. Her grandson, who lived with her, could remember  could remember her running her hennaed hands over his face and telling him he had the features of her late husband. She died in 1873.