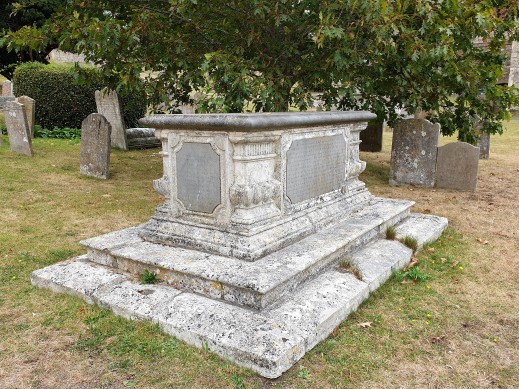 Near the West door of St Leonard’s church, Hythe, stands an impressive table tomb, heavily inscribed. It marks the last resting place of eleven members of the Andrews/Mackenzie/Douglas family and commemorates  five others. But to start at the beginning:-

Edward and Ann  Andrews of Hythe, had four children, all of whom did rather well for themselves. Edward became a tanner and set up his business in Dover.  When he died unmarried in 1798, he left everything to his brother Robert, another tanner, who had premises and quite a lot of other property in Hythe.  There were two sisters:  Mary, who married Robert Tournay, a member of an influential family of landowners, lawyers and clergymen; and Ann who married Henry Gipps, a surgeon.

Robert died in 1801 when his only child, Rachel, was eighteen or nineteen. He left £200 to his wife, plus an annuity of £100 and their dwelling house and its contents for life. Rachel received £100 immediately and £1000 on marriage or reaching her majority. This was for her own use and could not be touched by any future husband. There were some other bequests to his Tournay and Gipps nephews and nieces, but all the rest of his estate was to be managed by his executors and the money invested for Rachel.

Rachel turned twenty-one in 1803, and later that same year, her mother died. In December 1804, in St Leonard’s church, Hythe, she married Kenneth Mackenzie.  The Kentish Gazette reported the event laconically: ‘At Hythe, Colonel Kenneth Mackenzie, of the 52nd Regiment, to Miss Andrews of that place, a lady of considerable fortune’.

Mackenzie was forty-eight, the son of another Kenneth Mackenzie, the owner of a crumbling castle in Kilcoy in modern day Ross & Cromarty, and his wife Janet, the daughter of a baronet. By the age of thirteen, Kenneth junior had joined the army as an ensign. He was commissioned in 1775 and promotions soon followed. 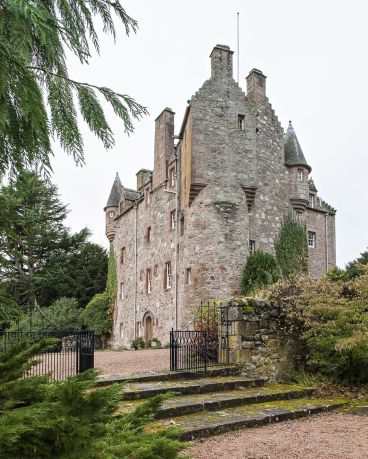 Following a decision by the British Army to train some regiments in light infantry techniques,  Sir John Moore, a proponent of the system, offered his own regiment the 52nd Regiment of Foot for the training at Shorncliffe Camp, near Hythe. Kenneth Mackenzie was his lieutenant-colonel. He developed what became known as the Shorncliffe System of drills, exercises and tactics. In their green jackets, the men became a familiar sight in the area, and trained repelling invaders by wading chest-high into the sea at Sandgate. 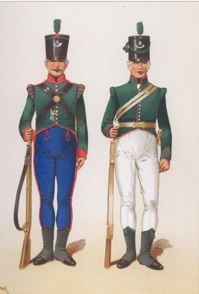 Riflemen of the Greenjackets at the end of the 18th century

In 1804, he was injured when he was thrown from his horse and was placed on the sick list. This gave him leisure to think of matters non-military and that December he married Rachel Andrews. The marriage was a love match, I hope, but to the advantage of both. He got money, she, a small-town tanner’s daughter, got status and, eventually, a title.

The family lived in a grand house in Hythe High Street, which seems to have been converted from two other properties, both owned by Rachel (she owned a lot of other property in the town, too, all leased out).   The house had  drawing- and dining-rooms, a nursery, four teen bedrooms, servants’ chambers, cellars, stabling for five horses, a  harness room, coach-house, coachman’s room and poultry yard. The premises were surrounded by a wall, with extensive grounds at the back, but also had one major disadvantage: it was next to the tan yard which Rachel had also inherited. Tanneries stink. It is a peculiarly horrible smell, but perhaps if Rachel had grown up with it, she was unconcerned.

The site of Rachel’s house in Hythe

However, the family were not permanently in residence. When they were, the neighbours knew all about it, as a piper played in the garden while the Mackenzies were at the dinner table. This was a habit of Scottish aristocracy and one later adopted by Queen Victoria at Balmoral, but it is one thing to hear the pipes in the romantic setting of a remote Highland castle, quite another in a small seaside town in Kent. The local newspaper reported the sound as‘ the weird notes of the Scottish national instrument’.

They also adopted the custom of hiring ‘mutes’ to stand vigil at the front door whenever there was a death in the family.  These were, in effect, professional mourners, paid to wear dark clothes and bear sober expressions.  Sadly for Kenneth and Rachel, they had frequent cause to employ these men. 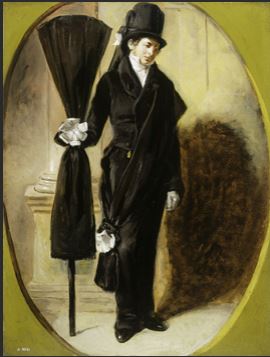 19th century ‘mutes’. If the deceased was a child, the mute wore white, not black, crepe

Kenneth Mackenzie recovered enough after his marriage to go on a campaign to Cadiz and on his return was further promoted. In 1813 he accompanied Sir Thomas Graham to the Netherlands, and acted as governor of Antwerp until 1815. He then retired to Hythe, where he took a keen interest in local affairs and became a jurat. Even in retirement, honours continued to flow. He was promoted lieutenant-general in 1821 and created a baronet ‘of Glenbervie’ on 30 Sept. 1831 and took the name of Douglas (his mother’s maiden name) by royal license a few days later.

In 1814, the couple leased to the National Society for Promoting the Education of the Poor in the Principles of the Established Church in England and Wales (usually, for obvious reasons, referred to just as ‘The National Society’) a large, old, rather ramshackle house in the High Street. They stipulated that it should be ‘fitted up as a school’ and so it was.  But by 1844, it had fallen into disrepair and Lady Douglas, as she then was, ordered the Committee in charge of the school to repair it. However, they had not the funds and she gave them notice to quit, making the school homeless. Fortunately, the Parish of St Leonard’s gave them the use of the old Poor House in Stade Street. 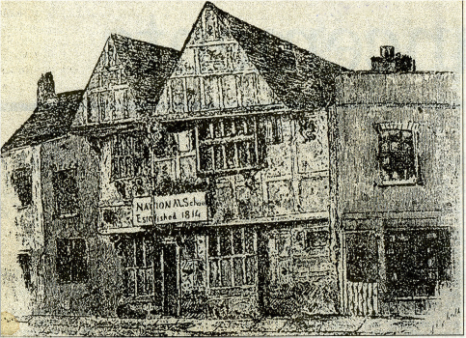 Sir Kenneth died at Holles Street, Cavendish Square, on 22 November 1833, and was buried at Hythe. His will and probate inventory both state that he was ‘of Broughty Ferry in Scotland and Upton house near Southampton and of Hollis Street Cavendish Square’, notably not ‘of Hythe,’ though that was where Rachel still lived and where she signed the paperwork relevant to probate. The will was very short, just a few lines and gave £100 to a servant and the rest, about £3000, to his wife.

Lady Douglas died in January 1847. Her death was announced in the press, but the local newspapers did not, as was usual, publish either an obituary or a report of the funeral. In June, all her household possessions were auctioned off, from the landau to the patent mangle to the cruet sets.  There is no trace of a will, and perhaps there was none as for the next three years her children were in dispute in Chancery with her Andrews relatives.

By the time she died, aged sixty-five, Rachel was living alone, apart from her servants, in the big house. She had lost five of her nine children. Sons called Kenneth and  William died in infancy; the eldest, Robert, heir to the title, died of TB in Port Mauritius in 1843;  another Kenneth had died in Ceylon in 1830 and his brother Edward in 1835. That left only Alexander, who died the year after his mother;  Lyndoch who passed away in Jersey in 1859, whence he had removed himself after getting badly into debt in Hythe in 1856 and being forced to hand over his wife’s marriage settlement (1); Donald and his only sister, another Rachel.

Rachel junior married her cousin John Snodgrass, an officer in the 96th Regiment, who died in 1856. After his death she went with her three children to live in Jersey, then Weston-Super-Mare and then to Cardiff where she died in January 1877. She left under £600 in her will. Donald, the youngest child, died at 2 Saltwood Gardens, Hythe, in 1883, after a peripatetic life which saw him go from ‘landed proprietor’ in a big house in Stowting to a very modest house in Hythe.

He died the year after the former family home was finally demolished. After Rachel’s death it had ben rented out, but was simply too large for most families.  For some years it housed a dairy and later a laundry until it was sold to a developer. He built Douglas Avenue, lined with three story houses, through the estate from the High Street. He had intended that the avenue would continue down to the Royal Military Canal, but the new houses were slow to sell and he stopped short. He sold the excess land, which had been a part of the garden, to Hythe Corporation.

Map showing the present Douglas Avenue, which bisected the estate 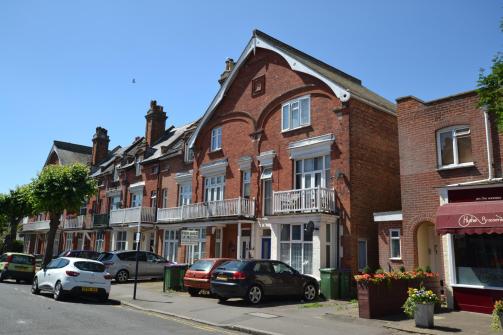 The family tomb is covered in names, on all five surfaces The top surface is now so badly weathered that it is impossible to read and we only know what was inscribed there thanks to Mr L. L. Duncan, who recorded it in 1891.

The big house is long-gone, the tomb decaying and the baronetcy became extinct with the death of Sir Sholto Courtenay Mackenzie Douglas, Kenneth’s great-grandson, in 1986.  All that remains of the family in Hythe is the road name.

The inscriptions in full:

South side In the vault are deposited the remains of Lieutenant General Sir Kenneth Douglas Baronet of Glenberrie Colonel of the 58th Regiment eldest son of Kenneth Mackenzie Esquire of Kilcoy Castle Rossshire. He entered the Army at the age of 13 and served his King and Country whenever called until his death which took place in London November 22nd 1833 aged 69 years. He assumed the name and Arms of Douglas by sign manual on the 19th October 1831 in memory of his uncle Sir Alexander Douglas of Glenbervie. He married on the 18th December 1804 (when Lieutenant Colonel Mackenzie of the 52nd Regiment) Rachel only daughter of Robert Andrews Esquire of this Town and Port by whom he had nine children and left surviving six viz: Robert Andrews, Alexander Douglas, Edward, Rachel, Lynedoch and Donald. Kenneth and William died in their infancy and Kenneth his third son died in Ceylon.

North side Within this vault are deposited the remains of Rachel Douglas relict of Lieutenant General Sir Kenneth Douglas Baronet who departed this life on the 24th January 1847 aged 64. To the memory of Sir Robert Andrews Douglas Baronet of Glenbervie Major 12th Regiment who died in Mauritius November 1843 aged 36. To the memory of Alexander Douglas Douglas Esquire late Lieutenant 68th Regiment who died in London on 6th May 1848 aged 38 and was buried in Kensal Green Cemetery. To the memory of Rachel Douglas widow of Major Snodgrass 96th Regiment, died January 15th 1877.

West end  In memory of Kenneth Mackenzie Lieutenant 58th Regiment third son of Lieutenant General Mackenzie who died and was buried in Ceylon aged 20 years and ten months. Lyndock fifth son of the above died in Jersey 15th May 1859 aged 41 years.

With thanks to Andy Curran and Mike de la Mare