Two West Hythe brothers, John and Benjamin Cheeseman, both ended their days far from Kent, in Australia, but they made very different journeys there and had very different experiences.

John Cheeseman was born in West Hythe in 1814 and baptised in Burmarsh church on 27 November that year (West Hythe’s own church, St Mary’s, had long since fallen into ruin). 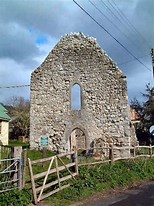 … and All Saints’ church, Burmarsh, where John was baptised

He was the eldest child of his parents, John and Mary and received some education as he was, as an adult, recorded as being able to read and write. He married Mary Ann Hobday on 17 June 1832 in Folkestone and the couple had two sons, Charles in 1833 and John in 1835. When he arrived in Australia in 1839, he described himself as a shepherd.

West Hythe is on the fringes of the Romney Marsh, which was then home to thousands of sheep and to their shepherds who here were known as ‘Lookers’.  These men tended huge flocks of sheep over a vast area which meant that they had to spend long periods away from home, sleeping and sheltering in small, brick-built huts.  The Marsh is now dotted with these ruined huts, with around a dozen remaining from more than three hundred and fifty . Built of brick, about ten feet square, with Kent peg-tile roofs, bare rafters and a chimney, they were very functional.  All had a small window and a fireplace, but with very little in the way of domestic comforts.

A Looker’s hut near New Romney

Lookers were self-employed, hiring themselves out to graziers. One man might work for two or three . They were more in demand at some times of year than at others – at the lambing season and at shearing time for example.  Outside these times, they may have had to seek other seasonal work.

The wages of many agricultural workers were falling during this period. John now had a wife and two small children, too young to work, to support.  Workers could take several courses of action when destitution threatened: protest (as did the Tolpuddle Martyrs); succumb to the Poor Law and go into the workhouse; become terrorists (as did the Swing rioters) or turn to crime.

John was tried for sheep-stealing  at Hythe in 1837 but acquitted, but on 7 April the following year he was convicted of stealing two bushels of potatoes and sentenced to be transported for seven years.

He was sent to the hulks and sailed on board the ss John Barry from Sheerness on 12 November that year, arriving in Sidney on 22 March 1839. He was unwell on the way out and was treated by the surgeon for pneumonia. He left behind a British winter which would be especially bleak for his wife and children.

Destitute, they were sent to the Romney Union workhouse at New Romney in December (1). Ann was set to knitting stockings and, later, picking half-a-pound of oakum a day. At least the boys could be educated, as they attended the National School in the town, though workhouse children were not always welcome. For one thing, they were frequently scabby, or as, the chaplain put it, suffering from a ‘cutaneous infection, calculated to excite the fears of the Managers of the School and the parents of other children’.  The medical officer said they had, ecthyma, a type of impetigo caused by poor hygiene and crowded living conditions – but not infectious.

The family were still in the workhouse in 1843, when little Charles died there, aged eight of an intestinal complaint.

In Australia, John was assigned to a master named Robson in the Yass district, well-known for its production of fine merino fleece. His  skills as a shepherd would have been valued in this sheep country of New South Wales, where only one in five convicts assigned to masters had any agricultural  experience at all.  He was also used to the long hours of solitude of the Looker system on the Romney Marsh. The difference was that while the meadows in the Marsh are lush, here grass was hard to find and he could be away from the station for days.

He got his Ticket of Leave on 9 May 1843 (2). This allowed convicts to hire themselves out or be self-employed rather than work for the Government on the condition that they remained in a specified area, reported regularly to local authorities and if at all possible, attended divine worship every Sunday. They could also acquire property.

The marriage of John and Ann did not survive their separation.  John could read and write, so could send letters to his wife without having to pay a scribe ( convicts were often able to earn a little personal cash by working overtime). Communication between the couple was possible, though terribly slow – and we don’t know if Ann was literate.  John would have got Certificate of Freedom after seven years servitude in 1845. He could have returned home (if he could get together the fare), or arranged for Ann to join him – Poor Law Guardians would sometimes pay for the passage and Romney Union looked favourably on such applications, which relieved them of the necessity of providing for the family.

Neither of these things happened and by 1851 Ann was living with William Webb, a coal miner, in Yorkshire. They told the census enumerator they were married, but no record of a marriage exists, and would in any case have been bigamous.  It must have been hard for Ann after John’s conviction: years in the workhouse, a widow yet not a widow and the mother of a dead child. Her remaining son, John, worked alongside his step-father in the mines.

Did John senior know of this arrangement, or had communications between the couple broken down?  Whichever was the case, on 10 October 1853 he married a young widow, Christina Stewart, a Scotswoman, at Wagga Wagga.  Such second marriages were not unusual.  John would have known that the chances of anyone finding out that Ann was still alive  were very slim indeed. 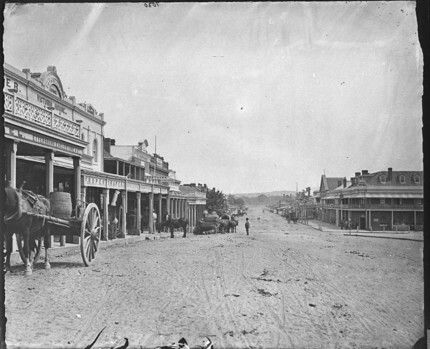 Wagga Wagga in its early days

Christina and her first husband had come to Australia as sponsored free immigrants. She had some money, and used it to buy land in Wagga Wagga which she and John farmed. In 1860, they had a daughter, Amy (perhaps named for John’s little sister Amy), and lived at Wagga Wagga as farmers until their deaths,  Christina’s in 1886, John’s in 1888.  It was almost certainly a materially better life than John could have expected in Hythe.

His surviving son with Ann went on to become an ironstone miner and to father three children. His Australian daughter Amy became a mother of nine.

As well as a little sister, John had a younger brother, Benjamin, who eventually travelled to Australia, too. Benjamin was born, like John, in West Hythe, in about 1828.  He worked as a labourer as an adult and  moved to Dover where in 1848 he married Jane Bass. The couple returned to Hythe where they and their three children lived in Stade Street.  There was another child, too, Thomas Bass, Jane’s illegitimate son.  In February 1853,  Benjamin secured sponsorship from James Egan, who owned a sheep station in Victoria, and the family sailed on board the ss Calliope from Southampton on 3 February 1853. The ship’s records show that Benjamin and Jane had been contracted to work for Egan at the Major’s Line station near Heathcote in Victoria for a period of six months, for which they were to be paid fifty pounds plus rations.

They completed their contract and then followed hundreds of others to the Maryborough goldfields. The goldfields of Victoria may very well have been the lure in the first place.  Gold had been discovered in Ballarat, only 58 km from Maryborough, in 1851 and the area became a magnet for anyone with dreams of a quick fortune.  All that was needed was a licence to prospect, at a cost of thirty shillings a month. When the Maryborough venture proved unproductive, Benjamin and his family moved on to Ararat, where gold had been discovered in 1857.

Then Benjamin disappeared or died, though there are no records of his death. His wife, or widow, went on to have another relationship and lived until 1888.

Their eldest son, Alfred, worked as a woodcutter and splitter, an occupation which guaranteed him employment. Australian settlers were busy at the time putting up hundreds of miles of post and rail fences round their sheep stations to control their grazing stock.  For three years, he worked in New South Wales, based at Wagga Wagga, where his uncle John lived with his wife Christina. His wife and children went with him and must have met the elder Cheesemans:  Alfred’s next two children, born in Wagga Wagga, were called – John and Christina.   They returned to Victoria in 1877, where they raised their family of twelve children.

John and Benjamin Cheeseman had between them at least thirty-three grandchildren who reached adulthood.  There must be huge numbers of descendants of these Hythe brothers in Australia and England and who knows where else.

Details of John’s second marriage and Benjamin’s life in Australia have been taken from http://www.graemecheeseman.com