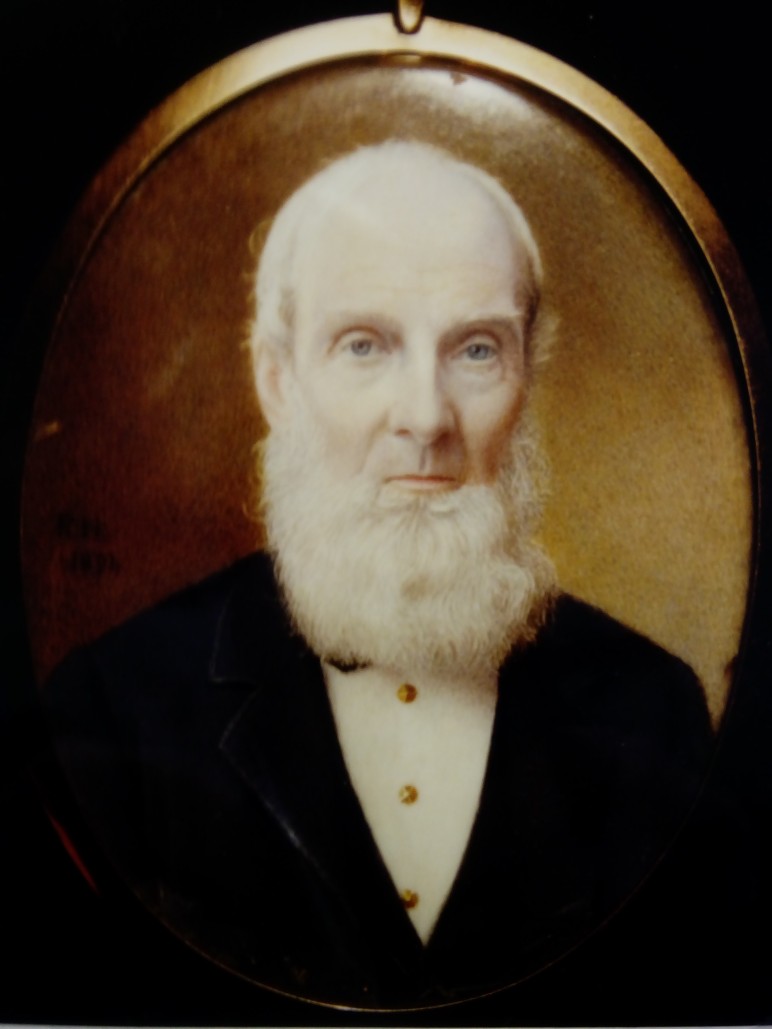 Alfred Bull lived an ordinary, industrious and dutiful life, until, in his old age, he became unexpectedly the most talked about man in Hythe.

He was  the son of Harry and Mary Ann Bull and was born on 30 September 1814 in Lewes where he was baptised in January the next year. He was the middle child of a family of nine. His father, who had previously been in partnership with his own brother Charles as a wool stapler, had set up a grocery business in the High Street the year before Alfred’s birth. He ran into financial difficulties and sold the business in 1827 to pay off his creditors, but opened a hatter’s shop and a stationery shop soon afterwards. He died in 1840. Coming from such a large family, Alfred could not have expected to inherit (if, indeed his father left anything), and having completed his apprenticeship with a Lewes draper he moved away to Kent where he worked for Lewis and Hyland, drapers of Ashford.

He was nearly thirty when he moved to Hythe and set up shop on his own account. He leased two adjacent High Street shops which were already trading as draper’s ; in 1846, he was able to buy them at auction and he then converted them into one premises. He lived over the shop and insured his furniture and effects for £100 and his stock in trade for £300(1). Remarkably, the shop is still there and is still a draper’s, now trading as Eldridge’s.

… and as it is today 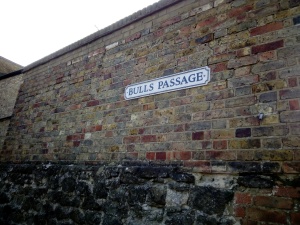 The alley next to it is still called Bull’s Passage

Now established, he could propose marriage and on 24 April 1845, at St Mary’s church in Ashford, he married Maria Cobb, a tailor’s daughter.

His business prospered. For a while his brother Henry, also a draper, worked with him and in 1851 they employed two male live-in assistants. Ten years later, things were very different. The babies started arriving a couple of years after the marriage of Alfred and Maria and came at regular intervals thereafter. Maria died, aged only thirty-seven, two months after giving birth to her sixth child, a fourth daughter. Alfred, widowed, with a family of six children under ten and a business to run, turned to his family in Lewes for help.

His older unmarried sister, Maria, moved in as housekeeper and stayed with Alfred until her own death aged fifty-nine in 1864. Alfred’s youngest child was still then only ten, so another maiden sister, Frances, took over. She died in 1873, by which time Alfred had retired and the children all grown. The sisters are buried next to Alfred’s wife in St Leonards’s churchyard.

The business was sold to Leonard Lorden, another draper, who sold it in 1896 to George Eldridge, whose name it has retained through various changes of ownership. Alfred, meanwhile, retired to Hardwick House, near the Bell Inn. This was  in the parish of Newington-next-Hythe and he was obliged to relinquish his posts as Hythe town councillor and JP which he had held for many years, performing his duties conscientiously but quietly. He was able, however, to remain as a trustee of St Bartholomew’s almshouse in the town and from 1886 served on the Burial Board.  With him lived his three unmarried daughters, Mary Anne, Ellen and Maria.

Then once more there was another huge change in his life, caused by another death. One of his father’s brothers, Thomas Friend Bull had married and had a son of his own, called Charles. This Charles was articled to a Lewes solicitor, then joined the London firm of Palmer France & Palmer in 1845 . He eventually became a partner and the firm became Palmer & Bull. He had a London house in Bedford Square and a country residence in Billingshurst and was under-sheriff for Sussex for many years. He was also very rich, a lifelong bachelor and his unmarried only sister was dead. He died himself, suddenly, in spring 1890.

Inexplicably, for a solicitor whose doctor had told him he had a weak heart, he died intestate. Alfred, now seventy-five, was his nearest relative and inherited his fortune, a whopping £133, 358. That is about £10 million today.  Alfred did what lottery winners do now – bought himself and his daughters a big new house. Called ‘The Gables,’ it was in Shorncliffe Road, Folkestone, and was described by the auctioneer as ‘a mansion’. The family employed three live-in servants.

Then Alfred’s thoughts turned to philanthropy. He purchased a plot of land on the south-eastern corner of Mount Street  in Hythe and paid for – at a cost of £4000 –  the erection of a two-storey building to be a public facility for the town of Hythe. Building started in 1891. It was carpeted and furnished and heated by Perkin’s patent hot water apparatus. On the ground floor were a library, a room for reading and games, and a ladies’ room.  A wide staircase led to a magnificent hall which could seat nearly four hundred, with smaller rooms that could be used as dressing-rooms.

Alfred also built a row of model cottages, still called Bull’s cottages, in St Leonard’s Road, with the rental income to be used for the maintenance of what was to be called simply The Institute. It was to be administered by three trustees who Alfred appointed. He was now to aged and too ill to take on the task himself. He chose two Hythe businessmen, Robert Worthington, a coachbuilder , and Leonard Lorden, to whom he had sold his business. The other trustee was Robert Sidle, ‘gentleman’. The trustees had very little restriction on how the Institute could be used –  ‘as a public reading room, Mechanics’ Institute, museum, lecture room, class room, gymnasium or recreation room, for the holding of public and private meetings, concerts, theatricals, lectures, classes, exhibitions and other entertainments of every description for the benefit of the inhabitants of and visitors to the Borough of Hythe’ The trustees could levy or raise entrance fees and/or subscriptions to provide funds and could, if they wished, sell the property(2).

The first of the row of Bull’s Cottages, tucked away behind St Leonard’s Road, Hythe

Alfred laid the foundation stone in 1891. Under the stone was buried a sealed bottle containing a national daily paper, the current issue of the Hythe Reporter newspaper and a copy of the inscription on the stone: This stone was laid by Alfred Bull Esq., J.P., on the 2nd November, 1891. There was no mention that he had paid for the building.

The opening ceremony took place shortly before Christmas 1892. Alfred was in poor health and his elder son, Frederick, another draper, had died earlier that year, so it was a quiet event.  Later in December he gave a dinner at the White Hart hotel in Hythe for the workmen engaged on the building but could not himself be present. In February 1893 he invited to tea at the Institute all Hythe inhabitants over the age of sixty. A hundred and one accepted and his daughter Ellen represented him at the event. The Institute, though it often struggled financially (Bull’s Cottages brought in only £60 a year) was a popular local amenity, especially the large hall with its space for entertainments of all kinds.

By March 1893, his health was  worse and he resigned from his post as Trustee of the Hythe hospitals.  According to his daughter Mary Anne, the only time he went out was when they took him for a drive on good days. (3)

Alfred died in 1894, having enjoyed his good fortune for only four years and was buried in Folkestone cemetery. The Folkestone Herald said when he died that ‘his name will have a permanent endurance and be embalmed in grateful recollection in Hythe.’   This was unfortunately not true, partly because of his own modesty. Had he decided to call his building ‘The Bull Institute’ following the example of J. D. Beaney who founded the Beaney Institute in Canterbury, he might be better known.  Modernisation was against him too: in the 1960s, a road widening scheme required the demolition of the Institute, whose foundations now lie under Prospect Road.

After his death, his surviving children proved that being rich does not necessarily make you happy. Mary Anne, the eldest daughter, became engaged to a widowed Rye brewer and wine merchant in 1893. The wedding was planned for April 1894,  but her intended, Herbert Chapman, died suddenly of ‘a painful malady of the head’ days before the event.  In August that year Thomas, her brother, contested his father’s will in the Probate Court. He had been left only £8000 and claimed that the three sisters who had lived with Alfred had exerted undue influence over him.  The case dragged on for three years until it was settled out of court. How much Thomas actually received  is not known. Then Emma, the only daughter who married, died aged forty-six of cancer of the liver in 1899.

The other sisters did not continue living together. ‘The Gables’ was sold to a retired General (later it became the Radnor Hotel and, during the 1940s, Folkestone Police Station).  Mary Anne returned, alone, to the family’s old home, Hardwick House in Hythe and died there aged fifty-five. Everything she owned was auctioned off by her executors, who were her solicitor and the brother of her dead fiancé. Ellen went to live in Bournemouth with a paid companion. She died there aged fifty-one . Maria moved to Tonbridge and died in 1918. She left a will but the named executors, her sisters, had all died many years before so her brother Thomas’s attorney handled her estate.

The sisters may have lived apart in life, but they sleep together in death.  Mary Ann and Maria rest in one grave in Folkestone cemetery,  and the adjacent plot, with an identical headstone, is occupied by Alfred and Ellen. 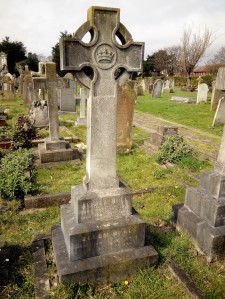 Thomas had emigrated to Ontario in the early 1870s. He married there, moved to Saskatchewan and then to Santa Clara in California. He had the reputation of being a ‘remittance man’ his father paying him to stay out of the UK. Along the way, he and his wife had eleven children.  He used his inheritance to set up in business as a fruit farmer and later a rancher, but it seems he spent it unwisely. He died in 1931, aged eighty. 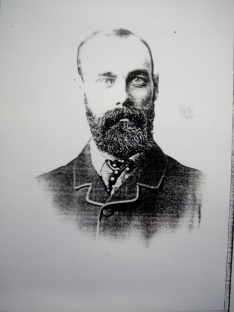 There is a postscript, or rather two. When the Institute was demolished, the foundation stone was saved and placed near the site.

And in 1999, a great-great grandson of Alfred visited Hythe from Santa Clara. He called in at his ancestor’s old shop and presented to Hythe Library a picture of Alfred, which still hangs there today.