The father of the family, Absalom Pelue, settled in Hythe after he left the army in 1877. He was a long way from his original home. He had been born in St Erth in Cornwall in about 1833 one of the seven children of a copper miner. This was the occupation he and his brothers turned to as well, until in 1856 he joined the Scots Fusiliers in Aberdare. The Rhondda is a long way from Cornwall and it is possible he had travelled there to take work as a coal miner, but thought better of it. From his army records, we know that Absalom was a big man for the time: five feet eleven inches tall with a forty-inch chest.

He spent most of his service in England, but was posted to Canada for just over two years in the 1860s, There he married Bridget Creed, who had been born in Montreal in 1844. When he brought her home, it was to the School of Musketry in Hythe, to which he transferred in 1865. It had only been set up a dozen years earlier, but now had an established staff. 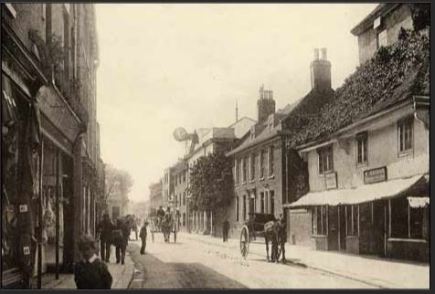 Hythe in the 19th century

The couple’s four daughters were Catherine Margaret (or sometimes Margaret Catherine) born 1865, Frances Ann Jemima , 1867; Emily, 1869; and Isabella Mary (or Mary Isabella), 1871. Perhaps because of their father’s military career, two of the women married soldiers themselves and five of Absalom’s grandsons joined the armed forces.

After leaving the army, Absalom worked as a labourer and the family lived in St Leonard’s Road and later Park Road in Hythe. He died in 1896 and is buried in St Leonard’s churchyard. Bridget took work as a sick nurse with Mrs Constantine nee Finnis, a widow.

Catherine Margaret married Charles William Middleton, a house painter,  in Farnborough in January 1893. He was only twenty and the bride lopped four years off her age. They went back to Hythe and lived in Chapel St and had three sons and two daughters. Later they moved to Market Street, now Dymchurch Road. 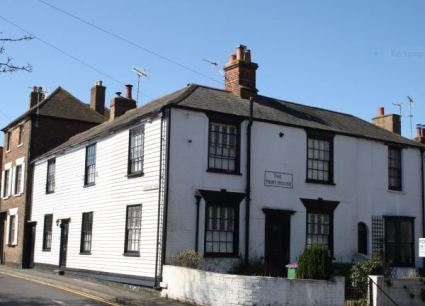 Catherine & Charles lived in part of this building  in Market Street

On 6 September 1885, at St Leonard’s church Hythe, Frances, or ‘Fanny Annie; as she signed herself, married a twenty-six-year-old soldier. He was Theophilus William Turner from Bristol. Theophilus gave his residence as Aldershot where his regiment was now based. The previous year, it had been at Shorncliffe, but when the order came to decamp to  Aldershot, Theophilus had deserted. Perhaps it was for love of Fanny. ‘Fanny Annie’ sounds like the affectionate  name her family, or perhaps just Theophilus, used.

The wedding was a matter of some urgency as Fanny was pregnant – with twins as it turned out. Francis Theophilus and William James were baptised in St Leonard’s in  April 1886. By then, Theophilus had left the army, but was still on the reserve list. The next year, Frances Theresa was born, then Isabella Katherine Alice in 1889. Shortly afterwards, the family moved to Plaistow. Another daughter, Lilley was born,  Edith Marie followed in 1894 but died aged two.

Theophilus had now become a house painter, like his brother-in-law Charles Middleton and joined the Amalgamated Society of House Decorators and Painters. In fact, he became the treasurer of the Plaistow branch. One day in July 1896, he stole the branch’s funds of £10.5s.8d and got on a train to Bristol. He said later ‘It was all through the drink. I did not know where I  was until I got to Bath’.  He travelled on to Bristol and having spent the entire amount handed himself in at a  police station in August. Meanwhile, his frantic wife had reported him missing.

A police officer from Limehouse travelled down to arrest him. Theophilus said he was very sorry and had never been in trouble before (forgetting his desertion, presumably). In court, he offered no defence and it was reported that he was previously of a very good character. His Union said it was prosecuting with reluctance. Theophilus was sentenced to twenty-one days hard labour.

We don’t know if drink was an ongoing problem or if this was a momentary aberration, but by 1899 the family had separated.  Frances had returned to live in Hythe  with her children. Her father had died, but her mother and sister still lived in the town.

Frances lived in a tiny house in Theatre Street, where she took in washing. She now had another child, George Robert, born after her return to the town. The house was not big enough for all the children: Francis (Frank) lodged with his aunt Catherine and her family in nearby Chapel Street and worked as a groom at the School of Musketry;  His twin, William, lived with their grandmother, Bridget Pelue, in Park Road and worked as a gardener; their sister, Frances junior, went into service at the Wilberforce Temperance Hotel in Hythe High Street – she was only thirteen. 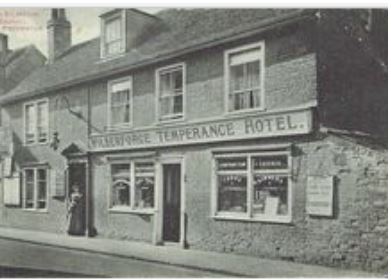 The twins, aged fifteen, joined the army as soon as they could, signing up to the 1st Battalion, the Scots Guards, in  November 1901.

In April 1904, Frances sent George, her youngest, off to school for the afternoon after his dinner break at home. At about 5.30pm, her neighbour called round to ask if he was back yet. A child had fallen into the Royal Military Canal,  she said.  George’s body was recovered from under Scanlon’s Bridge. He had been playing at fishing with a friend and slipped into the water. Desperate attempts were made by Dr Arthur Randall Davis to resuscitate him, without avail. The banks were not fenced and at the inquest, a recommendation was made that there should be some sort of barrier to prevent a recurrence. Frances was devastated by the death, sobbing throughout the inquest. The boy is buried with his grandfather, Absalom Pelue, in St Leonard’s churchyard, Hythe. 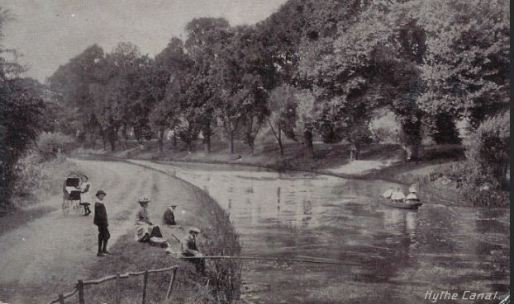 The canal in Hythe in the early twentieth century

Frances later moved to a larger house in Frampton Road and hired herself out as a nurse, an occupation her mother had followed.

In 1911, the twins Frank and William were serving as drummers in Egypt. The regiment returned home in 1913, but in 1914, formed part of the British Expeditionary Force. By then, Frank was a Lance-Corporal. He embarked from Southampton on 13 August 1914 and was reported missing during the first Battle of Ypres. He had in fact been taken prisoner. He died of wounds and ‘traumatic tetanus’ in Reserve Hospital, Halberstadt, Germany on 17 November 1914 and is buried at Niederzwehren Cemetery. His twin survived the war.

Frank’s grandmother, Bridget Pelue, collected his medals in 1922 – the British War Medal, Victory Medal and 1914  Star. It was also she who arranged for a brass plaque in his memory to be erected in St Leonard’s church. 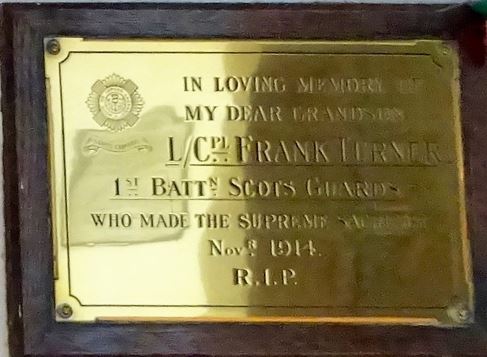 The memorial to Frank in St Leonard’s church

Bridget spent her last years in St Bartholomew’s Hospital in Hythe and died in 1926. 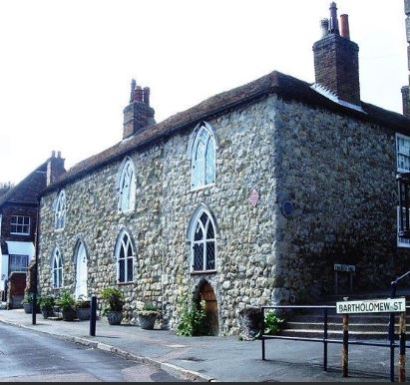 Her third daughter, Isabella Mary had married in September 1890, George Robert Hackford in St Leonard’s church. He was a sergeant in the Lincolnshire Regiment  based at Shorncliffe. A son, another George, was born later that year. A daughter,  Caroline followed a year later,  then a son Charles born in Aldershot,  a daughter  Isabella Mary in Malta, a son Frank (who died as a baby) in Cairo, and another son Robert in Lincoln. George senior, now a sergeant-major  took his discharge in 1906 and went to live in Derbyshire. His wife Isabella died two years later in 1908, perhaps while visiting Hythe, as her address was given as 4 Windmill Street in the town. George later re-married and ran a working men’s club in Chesterfield where his niece, Lilley Turner, worked for him. All three of his sons joined the armed forces, the eldest dying of pneumonia in India aged nineteen.

The youngest Pelue daughter married Filmer Thomas Shaw, a labourer, in St Leonard’s church on 27 July 1903. Their only child died young. They lived in Albert Road, Hythe. Filmer died in 923, Emily in 1942.

I thought when I started this how easy it would be to research the name ‘Pelue’ as it is so unusual. How foolish of me. The family’s name has turned up being spelt or transcribed as ‘Pellow’, ‘Pellew’, ‘Pillow’ ‘Peliewe’,  ‘Pelve’ and ‘Pelne’.