In the early eighteenth century, a Hythe schoolmaster read a translation of a work by Hector Savinien Cyrano de Bergerac, novelist, duellist, playwright and (apocryphally) possessor of an inconveniently large nose. The book was unusual. Published in 1657, after the author’s death, it was titled  Selenarchia: A Comical History of the States and Empire of the Moon.   In the story, Cyrano de Bergerac resolves to visit the Moon, to test his belief that it is a planet in its own right. After several misadventures he arrives at his destination and meets the Moon’s inhabitants, who have four legs, musical voices, and a wonderful weapon that shoots game and immediately turns it into a cooked meal. He also finds that he is no longer in his mid-thirties, but a mere fourteen-year-old.  Russen read the book it with an ‘abundance of Delight’ and decided to write a critique of the work.

He states that he is not entirely convinced by the plausibility of Cyrano de Bergerac’s method of travel to the Moon and considers and discards various methods of getting there, but eventually settles on his own invention:

A Spring of well-tempered steel, one end of which would be fastened to the top of a high mountain, the other to a frame or seat: this Spring being with Cords, Pullies, or other Engins (sic) bent, and then let loose by degrees by those who manage the Pullies. (1)

This would be successful only if there was a full moon.

Russen then proceeds to examine the plausibility of each of Cyrano de Bergerac’s claims, testing them against what was then know of science and what was written by philosophers. He was remarkably well-read for a provincial schoolmaster. He quotes  Ptolemy, Archimedes, Pythagoras, Aristotle (whom he disliked), and Plato; Ovid, Seneca and Cato;  Copernicus and Descartes. He had in his possession a copy of The Turkish Spy, fictional letters written by ‘Mahmut the Arabian’, and cites volume and page. He has read Knolles’ Generall Historie of the Turkes. He knows something of Islam and Hinduism and a lot about the Bible and Christian theology. He had read about experiments with blood transfusions at Gresham College.

The book, published in 1703 and entitled Iter Lunare: or, a voyage to the moon. Containing some considerations on the nature of that planet by David Russen of Hythe,  was a success and was re-issued in 1707. 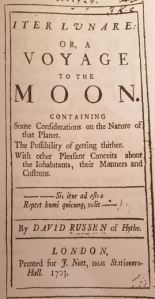 The title page of ‘Iter Lunare’

Who was David Russen? He first appears in the public record in August 1690, in a Treasury warrant to the Customs Commissioners establishing eight riding officers ‘for the guard of the Kentish coast (to prevent the carrying of wool into France and bringing over uncustomed and prohibited goods by the French privateers)’. (2) He was given a salary of sixty shillings a year, which was not a lot – perhaps a month’s earnings for a skilled tradesman. Clearly it was not intended to be a full-time job. Russen was posted to Lydd, but the  Commissioners reserved the right to move the officers to where they were most needed.  By his own account, he spent some time in Southampton. (3)

Three years later he was in New Romney, where his daughter with his wife Mary was born in January 1693. She lived only a few months as did the five babies who followed her over the next twelve years. The family was in Hythe by 1696, when the third child was born and stayed there until at least 1705, when the sixth baby was buried in St Leonard’s churchyard. In the meantime, Russen had given up his position as a Riding Officer as he was ‘not able to go through the hardship’.(4) He had received a pay rise to £4.10.0 in 1699, but it was not enough of a temptation.(5)

We know that he was a schoolmaster in Hythe because his publishers tell us so in Iter Lunare.  Russen explained in his text that he wished he had more leisure and opportunity to write and that he was ‘in the Midst of Hurry and Tatling of several sorts’. A footnote states that ‘The Author taught school and wrote this in his School-room among his Boys.’  Despite his wide-ranging reading, there is no evidence that he went to university and buried in his book is a rather mournful hint that he felt belittled by those who had:

‘Many Ingenious Minds and refined Intellects are hidden in obscurity, who have attained the Knowledge of rare Secrets, yet are unwilling to utter them because the Learned explode them’. (6)

He would undoubtedly be disgruntled that Cyrano de Bergerac has a lunar crater named for him while, he, Russen, does not.

Perhaps encouraged by the success of Iter Lunare, Russen published again in 1703, but this time he produced a polemic against ‘anabaptists’. It was entitled Fundamentals Without Foundation, or a True Picture of the Anabaptists, in their Rise, Progress and Practice. In case his was not clear enough, he added a subtitle: Written for the Use of Such as Take ‘Em for Saints, When they are Not So Much as Christians.

The title page of ‘Fundamentals without Foundation’

Russen’s premise is that the Church of England is the only theologically sound church. ‘Anabaptists’, a term which covered nearly all non-conformists, are in error (though not nearly so much as Quakers or, worst of all, Roman Catholics). He starts by identifying twenty-four different sects of anabaptists and examines their faulty theology. He then goes on to call into question the quality of their leaders. Although he was a man who resented being looked down on by learned men, he has no hesitation in deriding the uneducated butchers, cobblers, tailors and gardeners, ‘Mechaniks of the lowest rank’   who dared to preach the word of God.(7)  Worse are ‘she-prophetesses’, of which there had been at least one in Hythe.(8)

He is particularly harsh on Samuel Fisher, a former Vicar of Lydd. He acknowledges that Fisher was a man of learning but he deplores his conversion to non-conformism. Fisher  allegedly baptised women who were clad only in a ‘slight covering of Linnen’ in a roadside horse pond (9) and ‘from one Error he ran into another , became a Quaker and as I have heard, died mad’.(10) In fact, Fisher  died of bubonic plague in the outbreak of 1665, having spent most of the previous five years suffering for his beliefs in prison. (11)

Russen relies a lot on hearsay, especially regarding the morals of anabaptists, most notably their supposed propensity for bedding their women converts. He gives a long list of those guilty and includes Benjamin Keach, the aged and generally revered pastor of the Baptist church in Southwark.

The book was inflammatory enough to provoke a response. Three of Keach’s friends travelled to Hythe to interview Russen and find out the basis of his accusation. Russen apparently at first denied having written any such thing, but when shown his own book refused to reveal his source.(12) The next year Joseph Stennett, one of those friends, wrote a comprehensive refutation of the whole book in which as well as disputing Russen’s theological arguments, he deplores the ‘Gall and Wormwood that drips from Mr Russen’s pen’.(13) He notes the accusations of immorality and comments , ‘All these scandalous Instances are taken up on very little evidence.’ (13). At the end of the book, twenty-eight non-conformist ministers put their names to a declaration that Russen’s charges against Keach are ‘false, groundless and malicious’.(14) .

After this, Russen seems to have given up publishing and there is no further record of him in Hythe. He may be the David Russen who in 1714 married again in Deal and fathered several more, mostly short-lived, children, but I cannot be sure.

One thought on “From Hythe to the Moon”