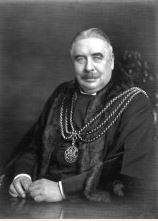 The language used in this post to describe learning disabled people is that of the early twentieth century and is unacceptable and offensive today. As it was used in legislation and in the naming of institutions, I have no option but to repeat it, with apologies.

Harold Nelson Burden’s bumpy road to riches began in Hythe. His mother, born Sarah Ann Munk in 1829 in Frittenden, was the daughter of Edward Munk, a farmer. Always known as Sally-Ann, she married, in 1857, Thomas Burden, who in March that year had taken on the Grocery and Provision Warehouse in Hythe High Street. (1)  Harold was born on 20 March 1860 and was followed by two sisters, Clara (1861) and Bertha (1863). Thomas died aged only forty-three in 1872 and the next year Sally-Ann’s father died leaving her a third of his £18,000 estate, which was almost four times the amount she had inherited from her husband.

Sally-Ann bought for £310 three cottages in East Street, Hythe from St Bartholomew’s hospital and on the site built herself a large house with its own lodge for a coachman and half-an-acre of garden. ‘East Bridge House’ stood, and still does, on the corner of East Street and Station Road and bears an impressive brickwork monogram and the date 1877. She was clearly proud of what she had achieved.  She invested more money in buying land and in setting up her son Harold, who had been educated at Alfred Winnifrith’s school in Hythe,  as a grazier.

Harold’s career as a grazier was not a success. In 1886 he filed for bankruptcy and at his examination early the next year he was found to owe £4876 but to have assets of only £771. The Registrar expressed his astonishment that Harold had no fewer than four bank accounts and had never had any clear idea of how much money was in any of them. Presumably his mother could not, or would not, bail him out.

Evidently unsuited to business, he moved away from Hythe to the village of Mariensleigh in Devon, where his former teacher, Alfred Winnifrith, was now Rector.  Perhaps he sought advice on his true vocation. On 25 September 1888 he was ordained an Anglican deacon by the Bishop of Carlisle, at the request of the Bishop of Algoma in Ontario, who was visiting England.  Harold had sought an interview with him after hearing him preach in St Martin-in-the Field (1). The next day, as ‘Rev. Harold Nelson Burden’ he married Catherine Mary (Kate) Garton and the couple sailed from Liverpool to do good works in Canada.

One source tells us that Kate was from a family of Hull tobacco manufacturers who had moved to Shoreditch in London and that in 1870 she had been an assistant to Octavia Hill, the influential social reformer (2). She had the miraculous power of aging very slowly. She is found in the 1871 census as a twenty-four-year-old teacher at the St Barnabas orphanage for girls in Pimlico. Twenty years later, she is recorded in the 1891 Canadian census as being only eight years older, at thirty-two.  Back in England, in 1891, she was just forty-one. She was however, a very pious woman and her obituary notes ‘her hatred of anything tending to laxity of the moral code’ (except lying about your age). The couple had met while doing missionary work in the East End of London.

They went to Uffington, sixty miles north of Toronto, to work with the Ojibwe people. This venture was not an unqualified success either. Two babies, a girl and a boy, were born but neither lived to see their first birthday. There would be no more children (and in the 1911 census, Harold denied the existence of these two).  Harold became ill and after three years they returned home. Harold listed among his achievements the building of two churches, the enlargement of the parsonage and the provision of a graveyard, where his children were buried. And, in summer 1889, he had been ordained priest.

Before they left Canada, Harold had been invited to fill a vacancy for a curate in Shoreditch, which he duly did. Then, in 1893 he entered Cambridge University where he spent the next two years, supplementing his income with writing.  He wrote two volumes about missionary work in Canada and a novel, Duty’s call: a story of a girl’s work in the service of others, and her reward, with some brief sketches of undergraduate life about a beautiful heiress who finds happiness through working with the poor.  It seems he was still, at this stage, impecunious, as he was based at Ayerst Hostel, which was a short-lived attempt to allow poorer students to study at Cambridge without paying prohibitive college fees.  Once he had graduated, Harold took up a post in Bristol as secretary to the Church of England Temperance Society and Chaplain to Horfield Prison, where he became interested in the treatment of problems caused by excessive drinking. The Inebriates Act in force at the time enabled ‘habitual drunkards’ to commit themselves voluntarily to a treatment centre. There was no such place in Bristol for women, so the Burdens persuaded the authorities to establish one, the Royal Victoria Home for Women. They became its managers. When the 1898 Inebriates Act was passed, allowing magistrates to commit habitual drunkards to reformatories, larger accommodation was needed.

That same year, Harold advertised his proposal to establish an inebriate reformatory in Bristol and soon afterwards, in partnership with one Edward Thomas, purchased Brentry House, which was licenced as a home for twenty women. Harold then established a charity, the National Institutions for Inebriates (NII) and under this umbrella bought a former workhouse in Norfolk which they expanded.

The Eastern Counties Reformatory for Inebriates

They also rented a former workhouse in Lewes, which was used for a hundred and thirty inebriate women, classified as ‘well behaved’, ‘manageable’, ‘troublesome’ and ‘very troublesome’. Another acquisition was Whittington Hall near Chesterfield.   Between 1902 and 1904 they set up over four hundred and fifty places for inebriates, with a further two hundred set up earlier at Brentry. By 1907 they controlled sixty per cent of all inebriates in reformatories in England and Wales.  It has been suggested that Harold financed these acquisitions through an inheritance from his mother, Sally-Ann, who died in 1902, but in fact, she left him nothing. Her entire estate was divided between her daughters, Clara and Bertha.  Clara died in 1907 and left her half of the estate to Bertha.

The system of locking up people with a drink problem did not work but the Burdens had another card to play. For reasons which remain obscure, as he had neither relevant experience or qualifications, Harold was appointed to the Royal Commission on the Care and Control of the Feeble Minded.  What he learned through this work was that the way forward in the ‘care, supervision  and control’ of learning disabled people would be in the creation of huge ‘colonies’ where they could be isolated from the rest of society.  He and Kate accordingly started to buy up suitable properties. In 1909 they rented from the Duke of Bedford the Dower House at Stoke Park, extended it and opened it as the Stoke Park Colony. In 1913, it became the first institution certified as a home under the Mental Deficiency Act of 1913 . In 1917, it was granted an expanded licence for 1,528 “inmates”, making it Britain’s largest licensed institution. The Burden’s former inebriates’ reformatories were also all converted into similar colonies.

It appears to have been a very profitable business as indeed it should have been. The reformatories for inebriates had the ostensible aim of ‘curing’ the residents who would then re-enter society. There was no such escape for the inhabitants of the colonies. They would be there for life. By 1908 the Burdens could afford to lease Clevedon Hall in Somerset as their private residence. It made Sally-Ann Burden’s Eastbridge House in Hythe look positively tiny. In 1918 they were able to buy it.

Once again, this wealth cannot be attributed to inheritance, even though Harold’s surviving sister Bertha died in late 1914 and left Eastbridge House not to him but to Kate.  The value of the inheritance could not be realised as it had been commandeered by the Army Service Corps for the duration of the war.  By the time it was eventually sold in 1919, Kate had only months left to live. She had suffered a stroke which ended her active work and eventually her life.

Kate Burden died on 25 October 1919, and six months later Harold married Rosa Gladys Williams,  probably the Gladys Williams who on the 1901 census was working as a store-keeper at the Royal Victoria Home. On the 1911 census she was living with the Burdens and described as an ‘adopted daughter’. She was fifteen years Harold’s junior and had been Superintendent Matron of Stoke Park since 1914. On the day of their wedding he made a new will.

Harold now left most of the day-to-day work associated with his colonies to his new wife and turned his attention to London, where he became master of the Company of Barbers  from 1924 to 1926 and joined several other London Guild Companies.  The Companies were by then largely gentlemen’s clubs and charged hefty membership fees, which Harold could well afford. He was also a Fellow of the Royal Society for Literature and of the Royal Empire Society. He died in 1930 of heart disease.

Harold Burden in the regalia of the Worshipful Company of Barbers.

Harold left nearly £150,000 (approximately £7 million today). With  this, Rosa could carry on their work and in 1933 donated £10,000 to set up the Burden Mental Research Trust. This was to be under the control of Richard Berry, the director of medical services at Stoke Park Colony, whom Harold had appointed in 1929.

Berry had then been a professor at Melbourne University, Australia.  His speciality was measuring heads, many stolen from Aboriginal burial sites, to identify ‘mental defectives’ and he was a dedicated supporter of the eugenics movement. In 1931 he and the consulting neurologist to Stoke Park, Ronald Grey Gordon, published a joint work: The mental defective: a problem in social inefficiency. They said

…the mental defective is often responsible for the making of the slum and swells the ranks of the drunkards, vagrants, criminals and prostitutes – all more or less direct charges on the community.

The answer, they said, was to test children at the age of eleven and then send them either to senior school or to a colony for mental defectives.   In 1934, still director of the Burden Trust, Berry spoke at a conference in Bristol, saying of his patients:

With complete absence of all human qualities or intelligence, they have to be clothed, fed, housed, and waited on hand and foot at the nation’s expense and one wonders why. Surely a kindly euthanasia is the only really kindly treatment for this pathetic side of mental deficiency. (3)

The patients at Stoke Park provided for Berry a laboratory for his work and many were photographed either before or after death as ‘specimens’ for his work  Cerebral Atlas published in 1938.

The memorials to Harold and Rosa at Stoke Park

Most of Harold’s biographers, with notable exceptions, tend towards hagiography. Even the claim on his memorial stone at  Stoke Park stretches the truth. He did not leave it to the nation,. In his will he left everything to Rosa.  Possibly she later made the arrangements, but they were not Harold’s doing.   It is difficult to unpick his motivation. Was it philanthropy or financial gain, or were his wives the real drivers of the business? Did he share the opinions of the man he employed, Richard Berry?  If so, how did he square eugenics and euthanasia with his Christian faith?  He remains a puzzle.

My attention was first drawn to Harold’s unlikely rise from bankruptcy to riches by a 2010 blog post byt ‘Veator Ecosan’ entitled ‘A curious case of making money from the mentally disturbed and how it developed into experimental mind control’. It can be read here: https://veaterecosan.blogspot.com/2018/02/a-curious-case-of-making-money-from.html