A sketch of John Bennett Tunbridge in 1894

John Bennett Tunbridge did not have an advantageous start in life. He was born in New Romney on 17 November 1850, the illegitimate son of a servant, Mary Tunbridge.  He spent his early years with her, his grandparents and their seven other children, until his mother’s marriage to William Apps, a groom.  By the age of ten, he was working as a butcher’s boy, though he must have combined this with school, as so many children did.  He could not possibly have imagined that he would one day travel to South America on the trail of a wanted man or catch the eye of the Prime Minister of New Zealand.

He had received enough education to join the Metropolitan Police in December 1867, though he had initial doubts and resigned three months later. He then re-joined in September 1869. By 1871 he was a police constable.

He was also able enough to be promoted sergeant only two years later. On 17 November 1877 in Harrow, he married Ellen Maria Hatch, an Irishwoman and the daughter of a Royal Irish Constabulary officer. She was exactly three years younger – they shared a birthday and married on that date, too.  John was promoted inspector the next year.  From 1881 he served in the detective branch, working in the commissioner’s office from 1887. It was during this period that he and his family (a daughter, Milly Norah, had been born in 1882) started visiting Hythe, where in 1886 he intervened when a man tried to eject two boys from a boat on the canal, hitting one of them with an oar. The other man came off worse.

Professionally, he was involved in the capture of Thomas Neill Cream, the ‘Lambeth Poisoner’ who murdered women sex workers with strychnine.

Photographed at the time of the latter’s arrest*

He was then sent to Argentina to bring home  Jabez Balfour, a corrupt financier who had left thousands of investors penniless and then fled the country.

John set off on 27 January 1894 and sailed from Southampton to Buenos Airies for what turned out to be a rough and unpleasant month-long voyage. On arrival, he checked into the Grand Hotel. Balfour had already been arrested, and the press confidently expected he would be back on British soil by the end of March. This was wishful thinking.  Balfour employed lawyers to fight his extradition, then, through pleading ill-health, managed to get himself released from prison. In April, matters were no further forward, but John received the news that he had been promoted to Chief Inspector.  Balfour appealed to the Supreme Court. In August he was rumoured to have been surrendered to the British authorities (ie John), but this was untrue: he had merely been re-imprisoned.  In November, the extradition was confirmed by the Supreme Court, but Balfour was then charged with other offences, which took precedence and his removal was delayed – again.

John took action. Unable, as a police officer, to communicate his misgivings directly to the British press,  he wrote in January 1895, to a friend who shared his letter with journalists. In it John complained that he had given up hope of any extradition within the next four-and-a-half  years. The ploy worked and in February a replacement was sent out to relieve him. As if to spite him, Balfour was finally removed from Argentina in April. He was subsequently sentenced to fourteen years penal servitude.

John decided to call it a day. He retired  in September 1895 with an ‘exemplary’ certificate and a substantial  pension, and the family moved permanently (or so it seemed) to Hythe, where John had acquired property in Park Road.  The local paper, the Hythe Reporter, suggested that his experience would make him a very useful town councillor. It was not to be, or not yet.

On the other side of the world, the New Zealand Police Force was in need of a man to clean up its corruption-ridden operation. Premier Richard Seddon, visiting London,  asked the advice of Sir Edward Bradford, chief commissioner of the Metropolitan Police and John Tunbridge’s name was mentioned. Perhaps, in his mid-forties, John felt too young to retire and he agreed to go to New Zealand, sailing from Plymouth to  Wellington (first class) in 1897 to become Police Commissioner for the country.  Ellen and Milly accompanied him. 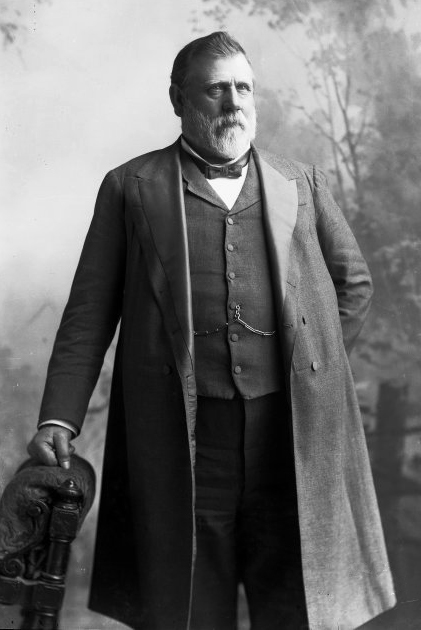 The next year he travelled round the country with the Royal Commission on Police, learning about the work of his police force and contributing ideas on reform.  After the Commission reported, along lines which accorded with his own views, he had a mandate for sweeping changes and the government gave him a free hand.  He began improvements at once, focusing on the crucial role of non-commissioned officers – the ‘backbone’ of the organisation.  He established a training college in Wellington, created a pension scheme for policemen and introduced merit-based promotions and increased pay.

He was, of course, subject to criticism. Some said his newly-efficient police force imposed a ‘reign of terror’; others thought he was too lax in internal discipline, especially with regard to drunkenness. In April 1902,  the government  overturned his lenient treatment of Nelson police who had been accused of inefficiency, immorality and corruption. John believed their offences to be minor, but the government apparently made its decision on the basis of information provided privately. What should have been an internal police matter had led to public political censure of the commissioner.

John, in protest,gave in his notice in January 1903 – which led to widespread condemnation of the government’s actions, but to no avail. John, Ellen and Milly  sailed for England and retired once more to Hythe, where they lived in North Road.

That he would become a councillor was inevitable, and in 1904 he made his first foray into local affairs by suggesting that unemployed men should be used to build homes for the working classes on council-owned land.  In November 1905 he was elected to serve on the council, but was not immediately popular with his colleagues, especially with John James Jeal, a builder who had been violently opposed to John’s home-building plan.  The feud continued for years and neither man lost an opportunity to undermine the other.

John’s background meant that he was used to giving orders and used to being obeyed.  As a councillor, he was often accused of being domineering and intolerant of faults in others, however trivial. He was much criticised for his action when two children stole apples from his garden: they were on a three weeks’ holiday in Hythe arranged by the Jewish Open-Air Fund Association, and he had them sent home immediately. In 1906, he  took particular exception to a travelling show: ‘…. on the stage outside, a lady kicked her legs about and showed a superabundance of rather unclean lace. Many people think there is too much of this going on, but no doubt it is a very great attraction to a certain part of the neighbourhood.’ Another letter to the local paper next week remarked that  ‘this apparently self-appointed censor of the public morals of our town’ had been singularly unobservant: the dancer with the frilly petticoats was, in fact, a boy.

In 1907 he found himself on the wrong side of the law when he struck ex-Councillor Frank White in the face at a meeting of the Hythe Ratepayers’ Association after White called him a liar. White brought an action for assault; John pleaded guilty, claiming provocation and was fined £1 with 9/- costs.

Despite the criticisms, John was re-elected year after year and continued as a councillor and JP for the rest of his life, serving as mayor in 1909.  He took a particular interest in beautifying Hythe by planting trees and shrubs and in providing allotments and decent housing for working men and always insisted on value for money in the Council’s activities. When war broke out, he volunteered to serve as a Special Constable, an experience which must have been strange after a gap of over forty years.

John Tunbridge as Mayor of Hythe

He died at home on 6 October 1928 after only a few days illness and was buried in Saltwood churchyard. He died only a few miles from his New Romney birthplace, but his journey had encompassed the whole globe.

John’s grave in Saltwood churchyard. He is buried with Ellen

In 1907 , His daughter, Milly Norah had  married, in Saltwood church, Innes Harold Stranger, a lawyer who went on to become a King’s Counsel.

* With thanks to Colin Garrow

2 thoughts on “Police and Politics”