Adolphus Harry Peter Valder was born in Hythe on 9 January 1839 and baptised in St Leonard’s church there. He was the son of Henry Robert Valder, a tailor of Theatre Street, Hythe, and his wife Elizabeth nee Castle. The parents lived respectable, quiet lives, although Henry was occasionally fined for failing to pay the pavement rate. Elizabeth may have suffered from dementia at the end. In 1890, she was asked to leave St John’s Almshouse where, as a sober and respectable widow she had been give a place some ten years earlier, for using abusive and threatening language (1). She died two years later, aged 79.

Adolphus Valder used all his Christian names at will during his life. He was sometimes Adolphus, sometimes Harry or Henry and occasionally Peter. In 1858 he decided to be Thomas Castle instead, and joined the British Army at Aldershot under this name. He was 5 feet five inches tall with light brown hair and grey eyes and served in the West Kent Regiment as a bandsman. He was in Malta for nearly five years and was later posted to Gibraltar, where he was discharged in May 1866 as unfit for further service. He had ophthalmia, which the examining physician thought would improve once he was back in the UK. His conduct was described as ‘very good’.

The cap badge of the Royal West Kent Regiment. The motto is Invicta – undefeated.

He married Ann Castle Savage, daughter of Thomas Castle Savage, a bricklayer in September 1868 in St Leonard’s church in Hythe. They went at first to live in Westminster, then Islington. In 1871 Adolphus (then going by the name of Harry) told the census enumerator that he was an officer of HM Customs, which seems unlikely. Later he would describe himself as either a labourer or an army musician.

By 1874 the couple, now with two sons, were back in Hythe. In December 1876, now with another son, they were admitted to the Elham Union Workhouse in Etchinghill.  A fourth son was born there early the next year and the family were discharged on 30 April 1877 (2). In October, Ann and the boys were back, and were joined by Adolphus after Christmas. He then absconded, but was arrested and imprisoned in Dover for deserting his family. The authorities took Ann and her sons to Dover to re-join him. By October, they were all back in Etchinghill.

Thereafter there is a continuous pattern of Adolphus being in prison and his wife and family in the workhouse. Another son, Louis (sometimes Lewis),  was born and the couple’s last child and only daughter, Jane, was born n the workhouse in 1883. The child had to return to the workhouse alone when she was five, as Adolphus was back in prison.

At every other census until 1911, both Adolphus and Ann are to be found in the workhouse, although it seems their stay was not continuous, as in 1902 their son Harry told the army that they were living in Stade Street, Hythe. In 1905, Adolphus wrote to the Incorporated Soldiers and Sailors Help Society, asking for assistance (3). The Society was founded in 1899 with Princess Christian, Queen Victoria’s third daughter and a founder of the Red Cross, as its first President and still exists today as the Forces Help Society. He explained that he had joined the army under a false name and that since then he had been trying, without success, to get a peddler’s licence (he had left the army thirty-nine years previously).  He wanted, he said, to get ‘a living and at the same time get my wife little extras that we are unable to get now.’ He enclosed testimonials, one of which confirmed that Ann was ‘incapable of doing anything’, though it does not say why.  The outcome of his request is not on record.

Both Adolphus and Ann died in the workhouse, he in March 1913 and Ann in August 1915. Both were buried in St Leonard’s churchyard.

Considering their poor start in life and what must have been a rackety upbringing, the Valder children led, as far as can be told, stable and industrious lives.

The eldest child, Charles was born in Westminster on 17 August 1869. His name was registered as Charlie Castle Valder, but he always preferred to use ‘Charles’. In 1884 he was apprenticed to Frederick Court a tailor of Greenstreet, a hamlet near Faversham. He served his six-year term, but in December 1892 went to Shornecliffe, an army base near Hythe and joined the Royal West Kent Regiment. He gave his occupation as ‘musician and tailor.’ Presumably his father had taught him to play an instrument, too. He was five feet four inches tall, with grey eyes and fair hair, and said that he was a Wesleyan. He stayed in the army, as a private, until 14 December 1913, exactly twenty-one years. During this time, he served in the Republic of Ireland, Malta and at various postings in England. On 31 March 1902, at the parish church in Watford, he married Sarah Rushby, and they set up home in Cheriton, the nearest residential area to Shorncliffe army base. There were no children of the marriage. In October 1914, Charles re-enlisted, this time in the Labour Corps. He was soon promoted to corporal and spent the war in the UK, being discharged as medically unfit – he had ‘myalgia’ (muscle pain)- in October 1917. He then found employment as a postman and later as a general labourer and the couple continued to live in Cheriton until Charles’s death in 1949.

When Charles joined the West Kent Regiment, he was following in the footsteps not only of his father but of his younger brother, Harry, who had enlisted two and a half years earlier at the age of eighteen. He gave his occupation as groom. He, too, was five feet four inches tall, with blue eyes and light brown hair. He served in Malakand, near the Khyber Pass, and in South Africa, where he was severely wounded, which is presumably why, in 1901, he was staying with relatives in Foord Road in Folkestone.

Winston Churchill also served at Malakand and wrote about his experiences

Harry was discharged from the army in 1902, worked as a labourer for a while and re-enlisted in 1903, for a short-term engagement, by which time he had grown to five feet five inches tall. He was finally discharged in November 1907 and died in the Ashford area in 1944.

The third son, Ernest, was born in 11 January 1874 in Hythe & baptised there 18 March, where he was given the names Ernest Tom Castle Valder. By 1891, when his parents were in the workhouse, he was working as a porter at the Seabrook Hotel (later the Imperial), a live-in position.

The Imperial Hotel , Hythe in the early years of the 20th century

He moved to Southwark, but stayed in the hospitality sector, working as a potman. He married Amy Alice Murray in 1897, and the couple had two sons and a daughter. He enlisted in the army in 1916, by which time he was running a lodging house in Walworth, and like his older brother Charles served in the Labour Corps in the UK, though his record shows that he was often afflicted with bronchitis. By the beginning of the second world war he was living in Lewisham, where he died in 1951.

His younger brother Louis Castle Valder was born on 4 June 1876. He made his living in steam laundries, working at first in Cheriton, where he had made his home with his wife, and later in Hammersmith. 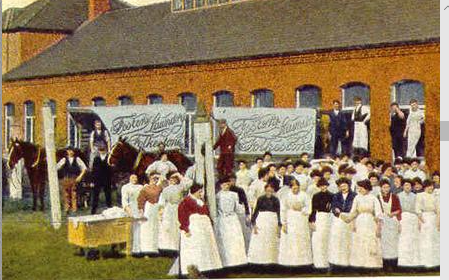 Foster’s Steam Laundry, Cheriton, in 1903. Is Louis Valder one of the eight men pictured?

He had married Ada Florence Perry in Cheriton parish church on 21 April 1901 and they had two sons. He also enlisted during the first world war, enlisting in December 1915 and being mobilised in June 1916. Like his brothers, he was a short man, only five feet one and a half inches tall. He served with the Essex Regiment as a private.

The fifth Valder son was Sidney Castle Valder born in the workhouse in 1877, and who died in Lyminge in 1903. Between those two dates there is no information about him on the public record.

The only daughter, Jane, worked as a servant as a young woman, and married in 1908 in London James Corboy, a railway porter.  They had at least one daughter. Jane died in 1919, perhaps as a result of the ‘Spanish flu’ epidemic that killed so many.

There remains the question of why, since they were all in paid employment, the Valder children did not support their parents and keep them out of the workhouse. Had they given up on their father and his undoubtedly erratic ways?  It could be that the parents did not want to take assistance. Or that help was given but frittered away. Or even that Adolphus and Ann had become so habituated to the workhouse and had so many acquaintances there – many elderly couples were regular visitors –  that it became, however dreary, a second home.