The first part of this blog was published in 2016, before I discovered the sad story of Elizabeth Back, nee Hole. I am indebted to David Haynes of Queensland for this extra information.

Elizabeth Hole, the eldest child of James and Elizabeth Hole of Hythe was born on 24 September 1814. She became a servant and married Daniel Back (or sometimes Beck) in Marylebone, London in 1837. He was also a domestic servant. Less than two years later, they emigrated to Australia, leaving from Plymouth on 13th May 1839 aboard the Lady Raffles with 234 other souls and their baby son, another Daniel. They arrived in September. They were enticed into applying for emigration to the new colony of New South Wales by advertisements posted in London and other cities. This whole adventure must have seemed quite attractive at the time: their passage was paid for and employment was virtually assured once they arrived in Sydney. This was the so-called Bounty system, separate from the Government sponsored scheme. 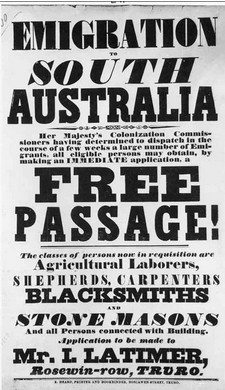 An example of Bounty emigration advertising

This opportunity seemed almost too good to be true and it was. Once there, Elizabeth and Daniel and all their co-emigrants were abandoned, left to fend for themselves. The jobs and housing did not materialise and there was no room in the Government-run accommodation.  Elizabeth gave birth again in 1840, to a daughter, Susan but there is no further trace of either of her children. It seems probable that they died.

Elizabeth left Australia, and Daniel, in about 1842. We don’t know whether it was the country or the man she wanted to escape, but she must have been desperate enough to find her own fare. Daniel remained in the new colony and soon developed a new partnership with another woman with whom he had six children before marrying her in 1858. He must have assumed that Elizabeth was dead.

She was not. She had entered the service of Mrs Elizabeth Frederica Crofts, the wife of Peter Guerin Crofts, the retired rector of St. John-sub-Castro in Lewes. She was his second wife and twenty years his junior and Elizabeth was her ladies maid. Their house, in Lewes,  was vast (it is now the HQ of Sussex Police) and required a live-in staff of eight, including a butler, coachman and footman.

The fact that it was in Lewes is significant: Daniel Back had been born near there, his family still lived nearby, so it seems that when she returned from Australia, Elizabeth went to her in-laws rather than her own family in Hythe. It is entirely possible that she was expecting Daniel to join her there.

Peter Crofts died in 1859, but Elizabeth stayed with her mistress until the latter’s death in 1878.  She then returned to Hythe where she lived in Stade Street and described herself as an annuitant and widow.  It is likely that Mrs Crofts remembered her faithful servant in her will and provided a pension so that she would not end her life in poverty. Her old age, though, according to her gravestone, was not a happy time.

She is buried with her sister Mary Hole, born in 1818, who alone of the siblings did not marry. She went to Ashford to live with her brother Thomas, and later with one of his daughters. Eventually she, too, returned to Hythe and lived in St Bartholomew’s almshouse in the town. 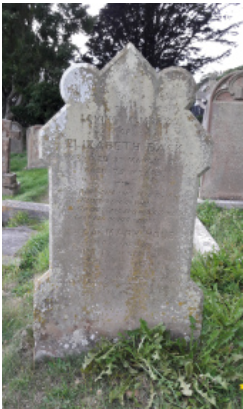