An impressive obelisk and a vault set into the hillside, the last resting places of two brothers who dominated Hythe civic life in the mid years of the nineteenth century.  The passing visitor peering at the graves would be none the wiser, however, as the weather (or aggressive cleaning) has erased all but the merest trace of their names.

They were James and Edward Watts, the sons of another James Watts.

James Watts senior was born in 1778. He was the son of James Watts and Mary nee Goddard who came from New Romney. He was baptised in St Leonard’s church in Hythe on 12 July 1778. His parents were, according to his obituary, far from rich.  He had a younger brother, Edward.  Aged just twenty, he married Hannah Holmes, again in St Leonard’s church on 30 October 1798. By his early twenties was starting out on his business and political career. He first became licensee of the Red Lion public house, which was at the centre of the livestock market in Hythe and a good place for making contacts. He started to accrue land and livestock himself and set up a coal and seed business.

He handed over the licence of the Red Lion to his brother (who held it until his death in 1826) and before he was thirty, he had gone into  business with a John Dray, running a hoy service round the coast from Hythe to London (often quicker than travelling by the dreadful roads, and heavy goods could be carried, too).

The hoy was very soon joined by another, but disaster struck only weeks later when during a gale the ‘Swan’ was dismasted and the captain killed.  Despite this, the business thrived and in 1810, James was doing well enough to buy John Dray’s share of the business.

He capitalised on the increased military activity in the area resulting from the building of the Martello towers and the Military Canal and won contracts to supply the army with forage and provisions. Reportedly, in 1814 his transactions with these contracts alone exceeded £100,000 – about £3.5 million today. By the time he made his will in 1826, he was a wealthy man, with a house and grounds in Stade Street, Marrowbone Hall, and thousands of acres of grazing land on the Romney Marsh. Increasingly his name was linked with those of Finnis, Mackeson and Tritton, the families who formed Hythe’s plutocracy.

The coal in which James traded was landed by ship at Hythe beach. James owned his own collier ship, the Shepherd,  which plied between Newcastle and Hythe. He was required by law to employ a coal meter, a council employee who weighed the coal as it was off-loaded, but refused to do so. Hythe Corporation made a great deal of fuss about this, but he was able to produce a certificate issued at the port of embarkation (1). Presumably this made the landing process more efficient. 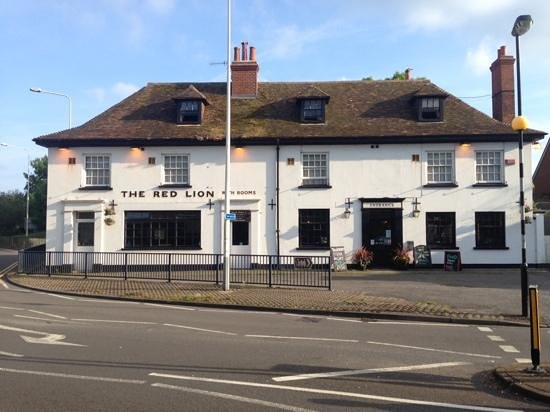 The Red Lion in Hythe, one of the first business ventures of James watt senior. It has changed little over the years.

Two of the Hythe Martello Towers. They were built in the early nineteenth century as part of the coastal fortifications designed to deal with a potential French invasion

He took a great interest in local affairs. For many years he was quarter-master of the Elham troop of Yeomanry Cavalry (which dovetailed nicely with his business interests); he became a Town Councillor and was a staunch Conservative  though that was a word he disliked, preferring the old-fashioned ‘Tory’; and eventually he became Mayor of Hythe in 1843, dying during his third consecutive year in office. The position of Mayor could only be held by the comparatively wealthy, as a great deal of hospitality was expected of the incumbent at his own expense, and James Watts was noted for the liberality of his entertainments. He was liberal with his charity, too. The Christmas before his death he gave ‘upwards of forty score pounds of beef and several tons of coals’ to the poor of Hythe,

He was an enthusiastic fox hunter and member of the East Kent meet, and would reportedly often spend fourteen hours a day in the saddle, either hunting or visiting his lands.

He and his wife had nine children born almost yearly after their marriage. The eldest son, John, died aged thirty-two in 1832. His younger sister Sarah, the eldest daughter, married the widowed Robert Tassell, a paper manufacturer and farmer of West Malling in 1835, but died just two years later. Her daughter, Frances, had died two months before that.

The next child, another daughter, died aged eight in 1811. James and Edward, followed. Then there was a daughter, Anne, who died in her twenties; another, Harriet, who married John Taylor of Sene (or Sceene or Scene) farm near Hythe and became eventually the mother-in-law of Arthur Randall Davis; and two sons called William, born in 1811 and 1812 who died aged only a few months.

Hannah Watts died on 1 July 1845 and James only four days later, apparently of an ulcerated stomach.

His funeral was a grand affair. The shops in Hythe closed, the pews in St Leonard’s Church were draped in black and the great and good of the town all attended. The MP, Sir William Deedes, sent his carriage. He was buried in the churchyard, but the stone which must surely have marked his last resting place has either disappeared or become wholly illegible.