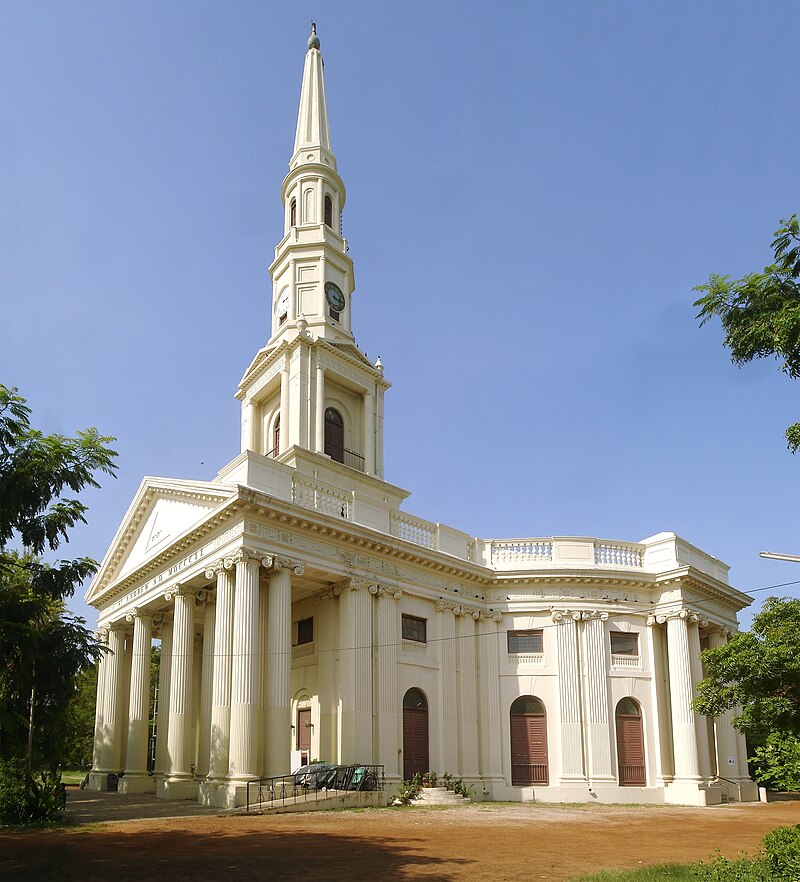 St Andrew’s Church, Chennai, which was consecrated in 1821

He was Presbyter-in-charge from 1824 to 1839, but evidently found time to travel about the sub-continent and to meet Laura Louisa Ludlow, the second daughter of Samuel Ludlow F.R.C.S., Residency Surgeon of Delhi. The family lived there in a house built by her father locally nicknamed ‘Ludlow Castle’. She married George James Lawrie on 21 Aug 1827 at Calcutta. 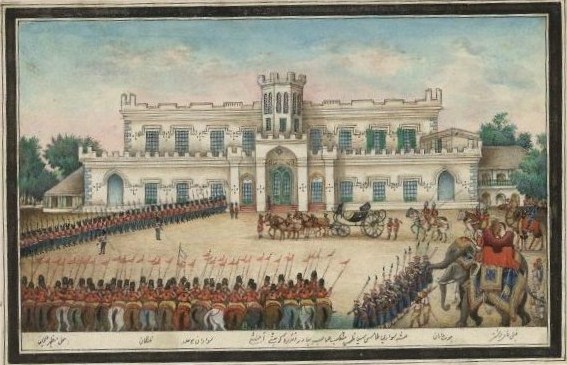 There, he and a colleague founded a school for boys, which originally had fifty-nine pupils, but has since expanded to become Madras Christian College, with a 365-acre campus and a huge student population.

Part of the present-day campus of Madras Christian College

On 11 January 1839, George resigned his post, and returned to take up the incumbency at Monkton, where he is remembered as being ‘sensible, upright, and kind-hearted, but possessed of a highly-cultured mind.’  Both his father and grandfather had been literary friends of Robert Burns, and George wrote, too, publishing Songs and Miscellaneous Pieces . In 1887 his poetry was used in Modern Scottish Poets. He is credited with having written the song Dae ye mind o’lang, lang syne: the first verse (of many) follows. It is to be sung to the tune of John Peel.

Do ye mind the sunny braes
Whaur we gathered hips and slaes,
And fell among the bramble busses,
Tearin’ a’ our claes;
And for fear they would be seen
We gaed slippin’ hame at e’en,
But were licket for our pains in the morning.

George and Laura had four daughters. The second, Annie Adair Lawrie, married Henry Bean Mackeson of Hythe and some years later her now elderly parents moved to the town to live near her, at a house called The Elms. George died of ‘natural decay’ aged eighty-two, and he and Laura are buried together in St Leonard’s churchyard.

Until the day dawn

Henry Bean Mackeson was the youngest son of Henry and Mary Jane Mackeson nee Hayman. He was baptised at St Leonard’s church in the town on 8 January 1813. His father and uncle William were co-owners of Mackeson’s Brewery in Hythe, which they had bought a few years previously. Heavy investment in the business had paid off, and it was now a thriving concern and a major employer in the town.
Henry Bean followed his father into the family business, but it may not have been his first choice of occupation. in the 1820’s Peter Fisher, another uncle, wrote to his father that if Henry ‘be disposed to try the navy in a medical way I will do my best towards procuring him an assistant surgeon’s appointment.’ It was not, however, to be, and he was instead articled to a solicitor. He did not follow this profession, either, but a knowledge of the law is no hindrance to a businessman, which was where Henry’s destiny lay. Once decided on a life ashore, Henry threw himself into Hythe affairs with enthusiasm. Indeed, he appears to have been one of those tireless Victorians for whom nothing was off-limits.

The malt house at Hythe, one of the few remaining Mackeson brewery buildings

Besides running the business, he became a keen amateur geologist and Fellow of the Geological Society, and some of his work was published in A History of the Weald of Kent. In 1840, when in his late 20s, he discovered in one of the Hythe greensand quarries part of the skeleton of a gigantic saurian (not, technically, a dinosaur), which is now in the Natural History Museum in London and bears the name Pelorosaurus mackesoni. He was also a fellow of the Royal Meteorological Society and in winter was often seen skating on the canal or tobogganing down the hills. He was town mayor nine times, in an unbroken run from 1872 to 1880. He was churchwarden of St Leonard’s church during the years when the vicar, Thomas Hall, was fund-raising and planning the renovations of the church, and his efforts are commemorated on a plaque in the church. The town council had, until a new town hall was built in 1794, met in the room over the church porch, the Parvis. Here, Henry discovered the ancient records of the town rotting away and had them removed to more suitable storage in the town clerk’s office. He found time to become a captain in the Cinque Ports Volunteer Rifles, and later in life to act as a director of the Elham Valley Railway.

His funeral on 8 March 1894 was attended by the entire town corporation, their pew draped in black, and one of his favourite pieces of music, Beethoven’s Funeral March, was played. In the evening the bell-ringers rang a muffled peal.

He had married, on 18 April 1860, Annie Adair Lawrie, the second of the four daughters of George James Lawrie and Laura Louisa Lawrie nee Ludlow. She was born at sea off Ceylon (now Sri Lanka). Her mother brought her back to the UK in 1837, and they were joined by the family soon afterwards, when her father became Minister of Monkton, Ayrshire. She married Henry Bean Mackeson in the church there. They had seven children, including twin daughters. After Henry’s death she lived with one of the twins, Mary Jane and died at her home in Tonbridge.

Mildred Adair Murray nee Mackeson was born in Hythe, the sixth child of Henry Bean Mackeson and Annie Adair Mackeson and baptised in St Leonard’s church on Easter Sunday 1868. In the same church, in 1899, she married Henry Walker Murray of the Royal Army Medical Corps.. They had a son and two daughters. Mildred travelled with her husband to his various postings, including to Nova Scotia and, his last post before retirement, Gibraltar. Henry died in Tunbridge Wells in October 1942. Mildred died in Hythe.